Is wine losing its hold on younger adults?

The boost for wine seen across a number of key wine markets in 2020 has masked a much more profound demographic trend amongst wine drinkers. Wine Intelligence consumer research shows that the wine category in the key markets of the US and UK is becoming increasingly reliant on older drinkers – those over 55 years old – while younger adults of legal drinking age (LDA) are shifting to other alcohol categories, or out of the alcohol space altogether. 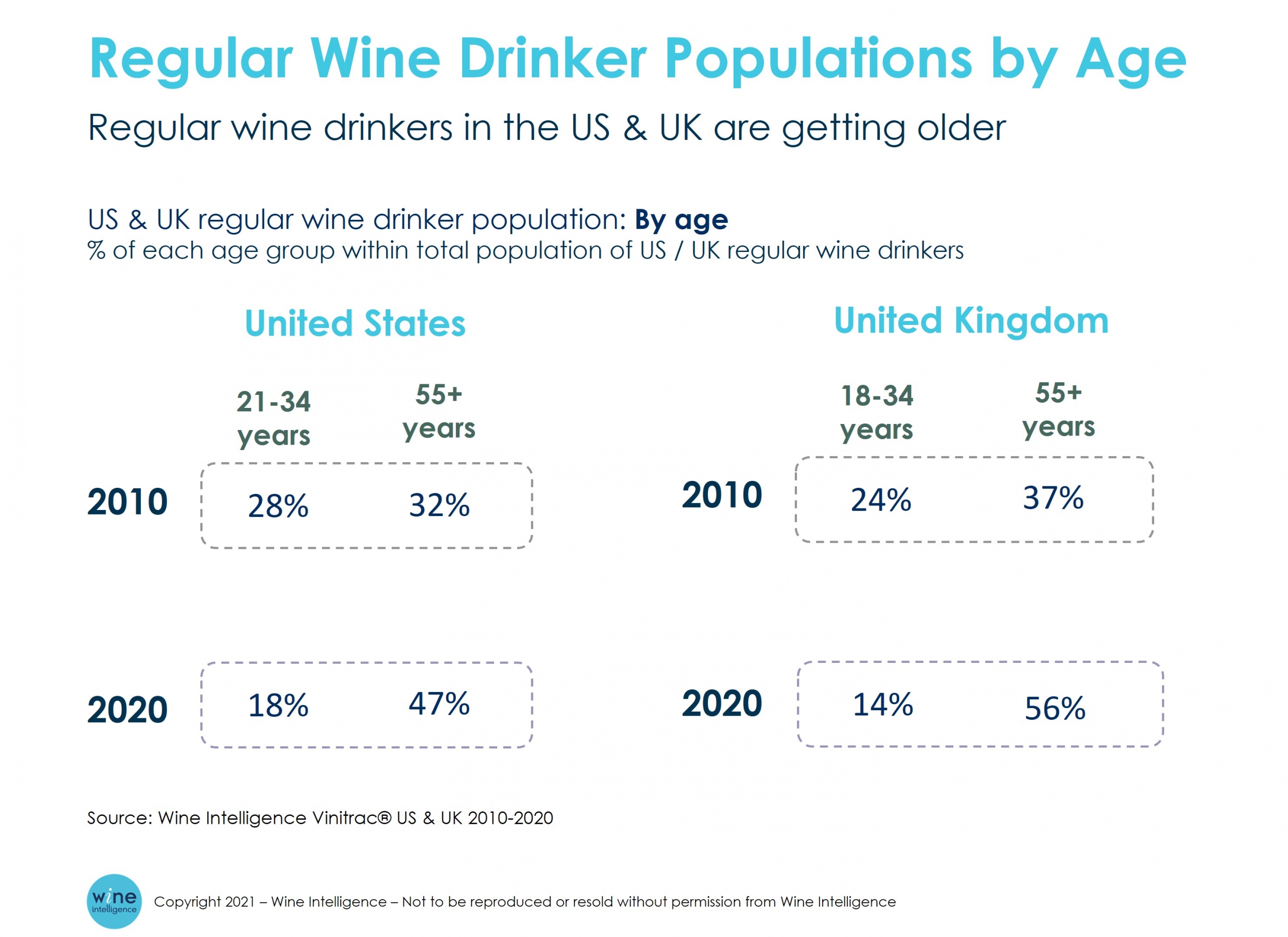 Within their own population cohort, the changes look even more dramatic. The data shows that  that a typical 21-34 year old in the US is around half as likely to be a monthly wine drinker in 2020 as they were in 2010, and there is a similar story in the UK.

There are some mitigating factors to take into account. The populations of both countries have increased since 2010, and part of this increase is down to people living longer, so a growing bias towards older consumers ought to be expected. And it is also true to say that wine has always skewed towards older consumers, as wine becomes more of a beverage of choice as consumers reach their 40s.

However, this trend to older wine drinkers over the past 10 years can’t be explained by a generally ageing population. Also, the trend isn’t being replicated in all markets. Canada’s wine drinking population is actually growing among younger adults, while Australia’s is in gentle decline across all age groups. The closest mirror to the UK/US trend can be found in Sweden, where over 55s are now the biggest age cohort of drinkers.

In the 2021 updated Wine Intelligence US Portraits and UK Portraits consumer segmentation models the segments that skew younger – know as Generation Treaters and Social Newbies – have shown significant changes in their behaviour compared to previous younger LDA drinkers. They drink wine more often, tend to spend more money on wine when they do buy it, and appear more confident about what they are buying, despite the fact that many have lower knowledge levels about wine compared with their forebears of 2010. In the US, these two younger-oriented segments now account for one dollar in three spent on wine in off-premise, and half of all dollars spent on wine in on-premise. 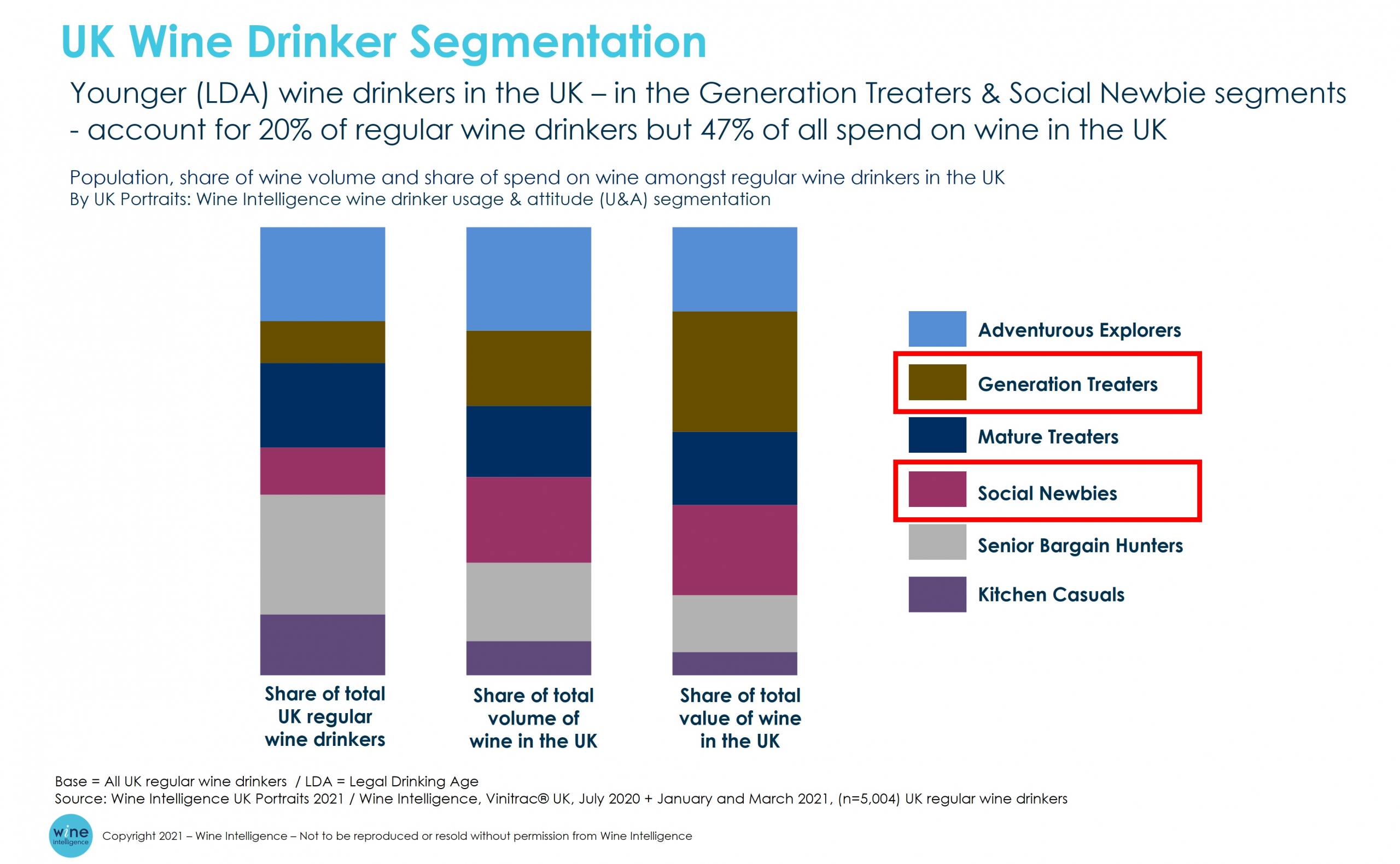 Additionally, younger adults do not appear to have disappeared from the category altogether. 24% of all wine drinkers – so including those who drink wine less than once per month – in both markets is between the legal drinking age and 34 years old, compared with 18% and 14% respectively for regular wine drinkers – so those who drink wine at least once per month – in both markets. In other words, younger adults have not left the wine category, but they appear to have polarized into a group of fully engaged, higher spending drinkers, and a much more peripheral, ‘irregular’ wine drinker group.

What might have caused this change from regular to irregular wine drinking among younger adults? Younger LDA drinkers have broadened their repertoire of alcoholic beverages, particularly the growing popularity of RTDs, including hard seltzers. We have also seen a specific pandemic effect of reduced social drinking opportunities and additionally, there has been a growing income inequality among younger adults. Younger LDA drinkers are also leading the trend towards both moderation and abstinence from alcohol.

What can, or should, the industry do about this loss of traction with younger adult consumers? Aside from the temporary effect of Covid on drinks portfolios, the other major factors appear to be much longer-run trends, which may not be reversible. More far-sighted wine industry players are already adjusting strategies to accommodate, such as moving into lower and no-alcohol product, with more emphasis on lower calories, lower carbs (most of which come from removing alcohol); or by acknowledging that the wine market will become smaller over time, but with a greater degree of premiumisation of the product that is sold, to a more digitally-confident and high earning segment.

There is good news for more premium producers in the fact that younger adult regular wine consumers in two major markets say they care more about wine than they used to. Unlike their 2010 forebears, today’s younger adult regular wine drinkers are more willing to spend more for everyday wines and trade up on wines for special occasions. There is also encouraging news for domestic producers in both markets, as the propensity to buy local, which has been exacerbated by Covid, is particularly strong among younger consumers. However, for those industry players in low priced, mainstream, undifferentiated product, these demographic shifts suggest the long-term outlook is more challenging.