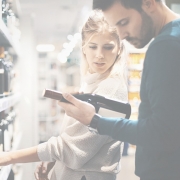 The 2021 Nobel prize in the field of economics was awarded to three academics (Card, Angrist and Imbens) who have provided us with new insights about both labour and education and shown how to use natural experiments to better understand cause and effect. So, what are natural experiments and what can we learn from these when it comes to consumer behaviour within the wine category?

Many of the big questions that we explore in social and consumer research try to establish cause-and-effect relationships, such as ‘How does a longer education affect someone’s future income’? While definitive answers would be highly prized by sociologists (and policymakers), robust conclusions can be very difficult to come by. The two classic problems are 1. Establishing correlation does not in itself convey causality, and 2. The control or baseline problem.

Let’s deal quickly with the correlation issue, which is often cited by research sceptics. This can be solved with rational comparison. There may be a correlation between library book returns and hot dog sales in a given city, but arguing causality here would be absurd (unless, perhaps, the hot dog stand was outside the library). On the other hand, comparing education levels and income outcomes is fundamentally logical, if you accept that income and education ought to have a statistical relationship in the first place.

The problem of baselines and controls is much more tricky. If we go back to our education length vs income question, we can establish a link between someone studying to masters level or beyond and earning more money than someone who didn’t. However we often do not have a true baseline for comparison: what would have happened if the individual had not continued studying to masters level? Would they have earned more money anyway? To do the experiment properly, we would have had to establish a group of identically-talented people, force some of them not to go to university while ensuring that others do so, and then see what happened 20 years down the line – neither realistic, nor ethical.

What this year’s Laureates have shown is that it is possible to answer these and similar questions robustly by using natural experiments. The key to their research has been ‘using situations in which chance events or changes result in groups of people being treated differently’.

For beverage alcohol in general, and wine in particular, where much of our consumption is done in social settings, it’s critical to understand the impact of this natural experiment – what’s happened in the past, what’s happening now, and how can this help us understand what will likely happen in the future. Below are two observations so far.

This trend can be seen in key sparkling wine markets, such as the US, UK and Canada. In these markets, although still not the primary drink of choice for informal occasions, there has been a significant increase in the proportion of consumers enjoying sparkling at both informal meal and non-meal occasions. 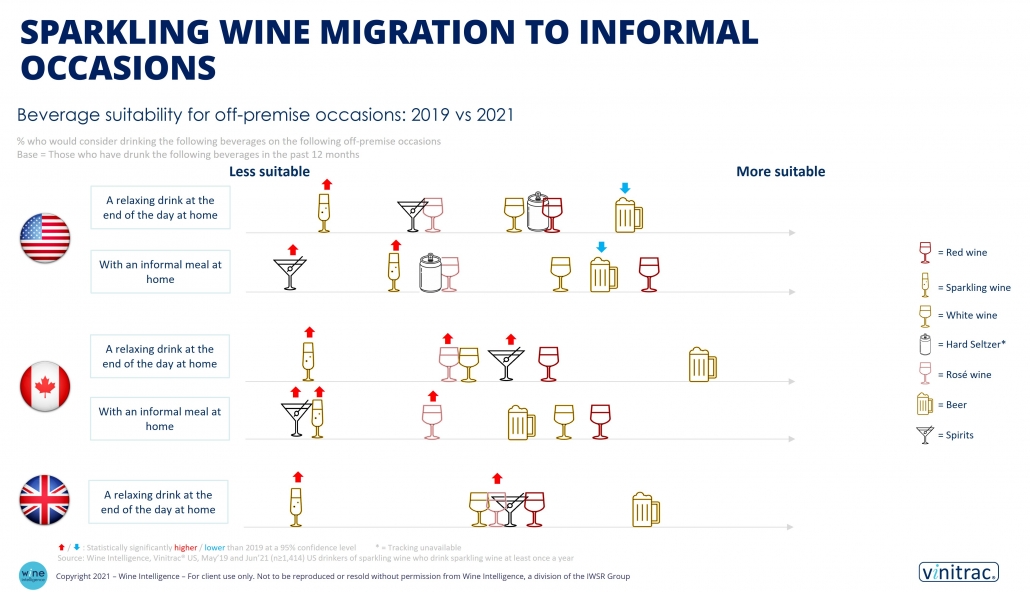 This evolution has an impact on the on-premise occasion as well. In the US, for example, the main change in perceived suitability of sparkling wine options is as a relaxing drink or pre-dinner drinks in a restaurant, chiefly at the expense of beer.

Our great natural experiment has also meant that we have typically spent less time in wine retail settings evaluating purchases, or chatting with the stores staff. In most markets, consumers have made fewer, quicker, trips to the off-premise and gravitated towards online purchasing for wine.

As a result, large segments of wine drinkers who occupy the middle ground in most markets – interested enough in wine, but not obsessive – have had less in-person exposure to a range of wine brands. The resulting impact has been a reduction in awareness of mainstream wine brands, although market data suggests that this decline has often not impacted sales volumes, as the brand’s core consumers have doubled-down on volume purchases, and those losing awareness were typically peripheral consumers of the brand to begin with. 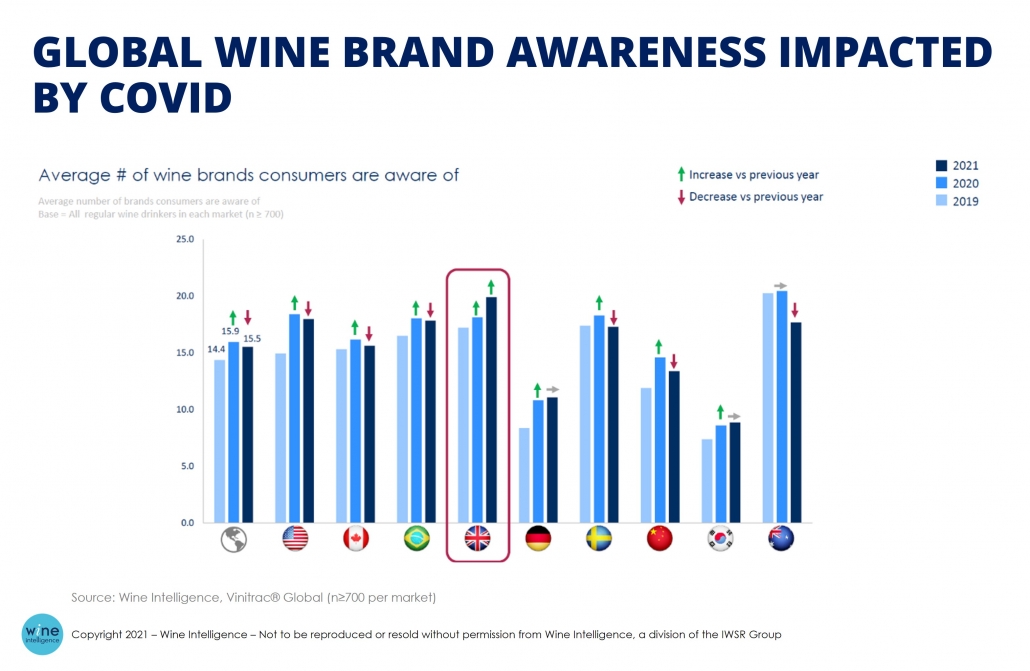 This has meant that the average number of wine brands consumers are aware of now compared with 2019 has decreased. The most acute example, as shown on the graph above, is Australia, where most of the top ten brands saw a marked decline in awareness in the second half of 2020. In this instance, other factors may be at work, such as retailer ranging policies, and the growth of online wine purchases direct from the producer (which, in Australia’s case, is more likely to be a niche estate rather than a big brand).

And as with any experiment, there are outliers, such as the UK. Here, Covid encouraged nervous consumers to switch out of major supermarkets, with attendant queues and more chances to catch the virus, in favour to convenience stores, which in the UK typically offer a small selection of best-selling brands, actually bolstered mainstream brand awareness.