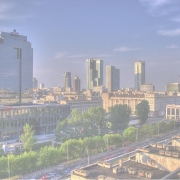 Until relatively recently, Poland’s wine market was a marginal player amid the large consumption markets in Europe. During the Cold War, it was rare to see wine in bars and on dinner tables – vodka and beer were the alcohols of choice. When wine did appear, it generally came from the southern parts of the Soviet Bloc, such as Romania, Hungary, Bulgaria and Ukraine.

Since the fall of Communism, Poland’s worldview has shifted westwards, first with the opening of travel links to the rest of Europe, and then with the accession to the European Union in 2004. The change in the political landscape ushered in many cultural changes, including exposure to western European food and drink habits. This is particularly apparent in the wine market in Poland in the past decade, as younger Poles who had travelled and lived abroad in other EU countries started to return home in numbers, bringing with them the adopted behaviours of those countries, while at the same time the quality and range of wine on sale in Poland expanded considerably.

This cultural evolution, and the response from the supply chain, are two of the reasons why Poland ranks as the 12th most attractive wine market in our Global Compass 2021 report, and has been in and out of the top 10 over the past 2 years. Other reasons include: a long period of economic growth, triggered by EU accession and subsequent investment, and a desire, particularly among younger adult consumers, to reduce their consumption of high-strength alcohol products such as the traditional vodka and local firewaters.

Even with this positive growth story of the past decade, wine consumption remains low by world standards, let alone European ones. According to the IWSR, total still wine volumes have risen 15% since 2016, but remain small compared with neighbour Germany. Per head consumption per annum is similar to Hong Kong and Barbados; Italians, French, Germans, and Swiss drink 10-15 times as much per head.

However, unlike the rest of Europe, momentum and demographics are on Poland’s side: overall wine consumption in Poland has been growing consistently, and especially among younger legal-drinking-age consumers. Only a quarter of Polish adults of legal drinking age drink wine at least once a week, but a disproportionate share of those 7.5 million consumers are Millennials and LDA Gen Z.

Although price remains one of the top three choice cues when buying wine, recalled spend levels on a bottle of wine has significantly increased in the past 3 years. Volumes were mildly affected by the pandemic, which curtailed the on-premise occasions favoured by these younger LDA consumers. If anything, Polish wine drinkers are willing to treat themselves more post-pandemic, buying better quality wine and trying new alcoholic drinks.

Attitude towards the wine category is generally very positive, with drinkers showing more flexibility and exploration, along with an inquisitive eagerness to enhance their category knowledge. Wine involvement indicators are on the rise, with nearly half of wine drinkers now saying wine is ‘important to their lifestyle’, up from a third in 2015. 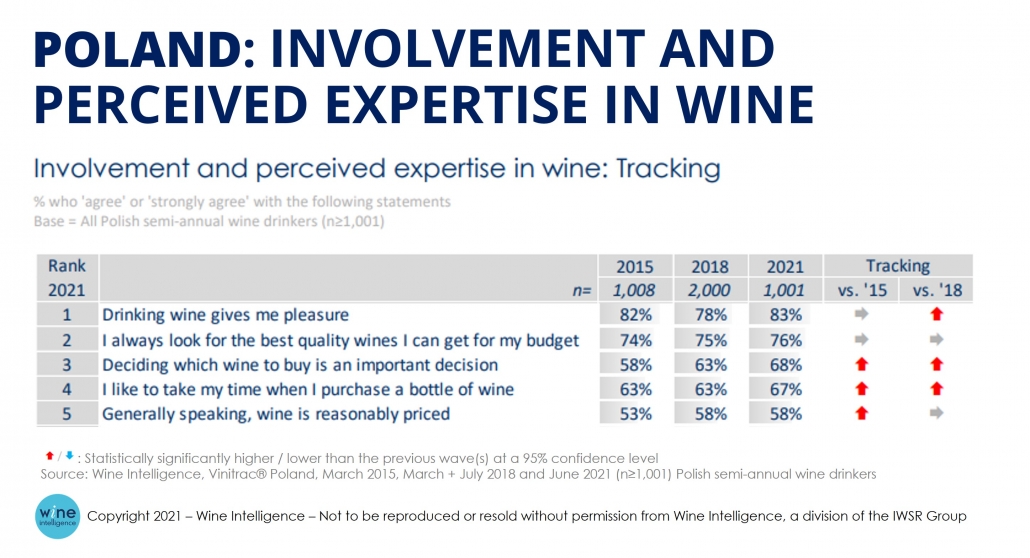 Poland is one of the fastest growing economies in Europe and one that is becoming increasingly influential in a European Union context. Disposable incomes have increased the past few years, providing a stronger purchasing power for wine. Although economic growth has been affected by the Covid crisis, the impact was relatively insignificant compared to other surrounding countries. Poland’s Gross Domestic Product (GDP) is expected to bounce back to 3.7% this year and grow to 4.7% in 2022.

Poland heavily relies on imports, but it is one of the few markets in Europe where typical Old World markets do not dominate overall. The traditional connection with Eastern European wines means they remain very popular – Bulgaria, Moldova, Hungary, Georgia all sell well in this market. Wine from markets such as the US and Chile are also well-known and appreciated. Poland is therefore especially interesting for global brands, with opportunity increasing as it continues to develop with consumers increasingly looking to core and recognisable brands as the on-premise bounces back post-pandemic. 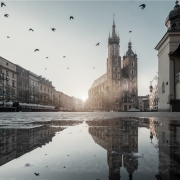 What are the opportunities for the no/low-alcohol wine category?