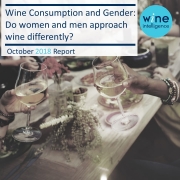 The report, published in collaboration with Women of the Vine & Spirits, the world’s leading organization dedicated to the advancement and empowerment of women in the alcohol beverage industry, also finds men and women have the same level of knowledge about wine, reflected in almost equal number of wine regions and brands known by both genders. However, men are significantly more confident with their wine knowledge than women. This is particularly true in the on-premise environment, where a significantly higher proportion of men claim they are “always or mostly the person ordering the wine when eating at a restaurant”.

It is also revealed that sustainable and ethical wines have more opportunity among women. In a global context, significantly more women would consider purchasing organic wine, sustainably-produced wine and Fairtrade wine than men. The biggest gap is observed in Sweden, where 69% of women said they are likely or very likely to buy organic wine, whilst only 52% of men would consider buying it. The purchase intent for sustainably-produced and Fairtrade wine mirrors that of organic wine, with more women being open to buying these wines than men.

Wine Intelligence also investigated whether each gender prefers wines produced by winemakers of their own gender. The evidence suggests women are more likely to purchase wines made by female winemakers when this fact is consciously pointed out to them in an explicit way. Simply putting the name of the female winemaker on the front label doesn’t garner the same appeal.

Commenting on the report, Wine Intelligence CEO Lulie Halstead said: “Plenty has been written about the supposed differences between men and women in terms of how they think, act and interact with one another, and with it a number of fascinating and mostly anecdotal theories about gender-related wine behaviour. In this report, we have taken some of the most commonly-heard hypotheses and used our international consumer behaviour and attitudinal datasets, plus some specifically-designed research experiments, to see if there is any evidence to support or refute them. It was wonderful working with Women of the Vine & Spirits to publish this report that explores the relationship between gender and wine.”

Women of the Vine & Spirits Founder & CEO Deborah Brenner adds: “Women of the Vine & Spirits is thrilled to collaborate with Wine Intelligence on this first ever report focused on gender and wine consumption across six key wine markets. In an era where the role of gender is very much front of mind, an independent study that is statistically reliable and valid is essential for our industry and innovation. We were particularly intrigued with the finding that women are more likely to purchase wine if they are aware the winemaker is a woman as we are soon to launch our “Women Owned & Certified Program” focusing on women behind the brands and Supplier Diversity.”

Report details:
Further details about the report can be found here.

October 25, 2018/by Courtney Abernathyin Press Release
https://www.wineintelligence.com/wp-content/uploads/edd/2018/10/Gender.jpg 720 737 Courtney Abernathy https://www.wineintelligence.com/wp-content/uploads/2018/07/logo5.png Courtney Abernathy2018-10-25 13:39:282018-10-25 13:39:28Press release: Women are more likely than men to be interested in buying ethical and sustainable wines, and wines made by female winemakers, but lack confidence in their wine knowledge, despite knowing as much about wine, on average, as their male peers
Subscribe to our newsletter

Press release: The Indian wine landscape is dominated by Millennials who are...