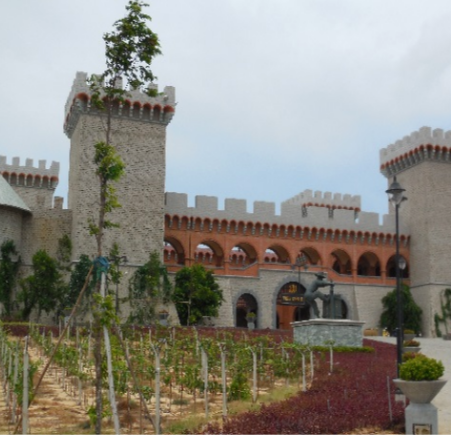 Wine discoveries around Vietnam start with fruit wines, include a Dalat wine tasting, and end at a prestigious chateau

Observing people and their cultures (we might call it ethnography) linked with discussions (or be it interviews) are tasks we researchers engage in on a daily basis. What became clear to me early on in my trip to Vietnam is that the word “wine” is often used for alcohol drinks in general and sits as a title on menus or above shelves with alcohol bottles. Prompting further why this is so led me to a discovery of several fruit based wines that were produced locally and on offer even in the most remote towns around the country (see picture). But fruit wines are not the only wines produced in Vietnam.

The French introduced the elite wine culture pre-1954, but during the last decade as the living standards improved, more people travel overseas and are exposed to foreign wines too. With this in mind, ideas started to emerge how a European-style wine could be produced in Vietnam. Today, the Dalat area with its cool central highland climate and strong French heritage is famous for producing artichokes, lettuce, strawberries and also grape based wine. Unlike in the more sophisticated wine producing markets, Vang Dalat (Dalat red wine as on picture) uses table grapes, but makes the wine affordable to Vietnamese families. 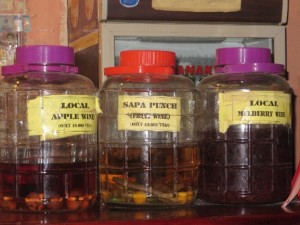 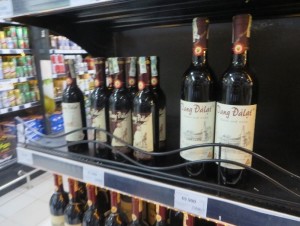 Traveling from Dalat south lies another Vietnamese wine treasure. Near the beach and the golf course in the village of Mui Ne, overlooking the South China Sea, stands a wine castle constructed majestically on 706B street, which is named “path leading to heaven”. The grapes here are however not sourced from Vietnamese vineyards but by the first Vietnamese owned winery in Napa. It is designed to be an architectural landmark, to serve to introduce Vietnamese to wine, and to attract wine loving tourists. The cellar stocks five different ranges of wine from the Napa Valley for visitors to savour in an elegantly and luxuriously decorated tasting room (see pictures). 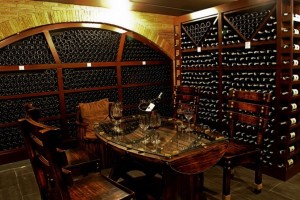 On the other hand, there were also numerous wine brands noticed in supermarkets and restaurants, particularly in the bigger cities. French wines have traditionally been the most popular, but Chile has recently overtaken France in terms of volumes (300,000 9L cases in 2013 as reported by IWSR), followed by Australia, US and Italy. But these wines are mainly purchased by expats and tourists, and very few Vietnamese were spotted drinking wine during my trip.

The above mentioned developments will help the slowly building wine culture, especially among high educated, wealthy Vietnamese. Nonetheless grape based wine is on the rise with 14.9% growth in the long term (CAGR 2009-2013 by IWSR 2013). Also per capita consumption is raising at almost 12% year on year (CAGR 2009-2013 by IWSR 2013), but from a very low base of 0.17 litres per adult. As the economy continues to grow (GDP per capita was 1,911 USD in 2013, but growing at a fast rate: 11.58% CAGR 2009-2013), and the country is open to the imports from the West, also the wine industry is projected to grow further. And there are windows of opportunity for wine companies that are looking for a new emerging market to enter. For more information on the investment opportunities, please look at our recent Compass report, or contact me directly.

Chile by Land, Sea and Air
Subscribe to our newsletter