When looking at the number of wine brands consumers recall and purchase, the data shows a big variance by market – why is this?

Starting next week, thousands of wine consumers around the world will be asked about their usage and attitude to wine – including what wine brands they know, buy and drink. This ritual happens every three months in Wine Intelligence Vinitrac® Global, our survey of wine consumers which has been running since 2007.

Recently, we ran an analysis of over 25,000 interviews across 26 countries, collected over the past 2 years, looking at the average number of wine brands consumers remember and have purchased. As you can see from the chart below, the brand awareness and usage averages are significantly different between markets. 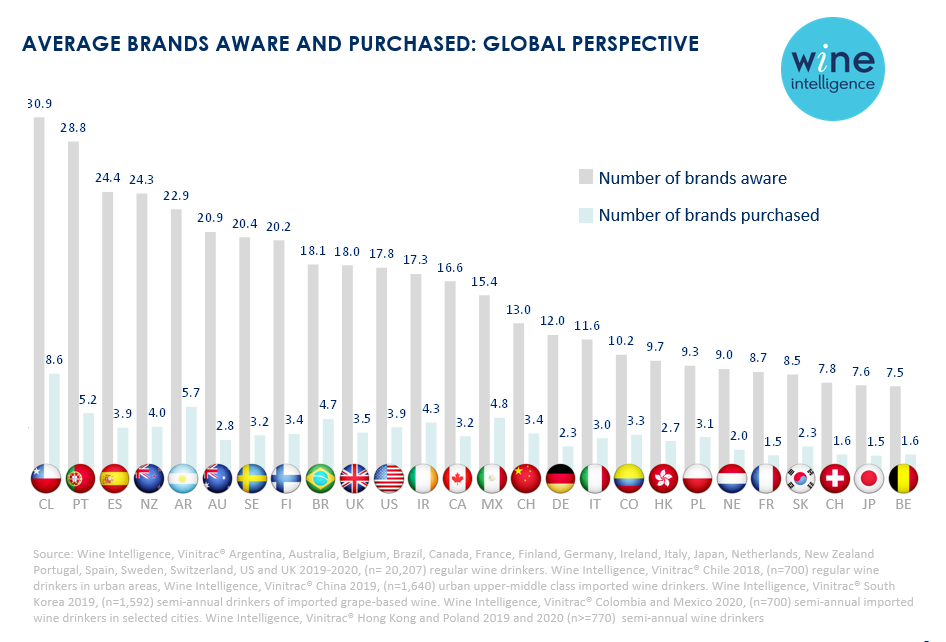 This data prompts some immediate questions: Why are wine brands more influential and dominant in some markets more than in others? How can we explain why Chilean or Portuguese consumers seem to remember four times as many wine brands than consumers in Belgium or Japan do? Why aren’t French and Italian consumers able to recall as many brands as their counterparts in other Old World producing countries?

We can see there is a positive correlation between a country that has a strong domestic production and a market where consumers are able to recall more brands. The top six countries in terms of wine brand recall are all production markets. The hypothesis here would be that wine plays a stronger role in that culture, and knowing wine brands is therefore a cultural norm.

However, France, Italy and Germany are outliers in this pattern and challenge the idea that strong wine culture equals strong brand recall. An alternate theory is that these countries have very strong regional brands – denominations of origin such as Bordeaux, Rhone, Valpolicella and Mosel – which act as brand ‘guardians’ and enforce quality and consistency in the way producer brands normally do. These region brands have also existed in this way for many years, and their hold on the consumer decision tree is reinforced by category planograms in store, and the composition of wine lists.

Another possible explanation could be the structure of the wine supply chain. Chile, New Zealand, Argentina and Australia represent the key New World wine production zones, where region brands have been less important in the structure of the industry, and individual brand owners have been more prominent. Crucially, it seems, the regions in these New World countries have had less regulatory influence compared with their Old World peers in terms of enforcing brand values. Instead, it is the market itself that has determined the purchase cues that matter, which has passed the responsibility of the quality and consistency promise (broadly accepted as the definition of a ‘brand’) to the producer, and the retailer which chooses to list the brand.

How, then, do these theories explain the observed brand power in markets such as Spain and Portugal? Both of these are Old World countries, with widely recognised historical regions (Rioja, Alentejo), and yet brands appear to occupy New World levels of head space. Possible explanations could include the theory that, in these countries, there is more diversity of wine styles coming from regions – though this theory doesn’t hold in the case of Rioja (and some other Iberian regions) which enforces a clear and consistent style. It could also be that Spain and Portugal are home to more powerful producer brands, such as Torres, which have established power in the supply chain within a regional brand structure, in part by offering products from different regions but united under their brand umbrella. However, the same could be argued in Italy and France, where producers such as Antinori and Castel have also developed cross-regional portfolios.

What is apparent is that there is no neat explanation as to why producer brands matter more in some markets and less in others. Brand, after all, is simply a construct in the mind of the consumer. It only matters if it actually helps a consumer make a decision. What our brand health data tells us today is that the relative position of brands in each market is probably the result of a cocktail of historical factors – supply chain structure, regulation, and successful marketing strategies that in some cases date back decades, among other things.

However, if one follows this logic, this picture of brand power by market should not be thought of as static. Brand owners, regions, supermarkets and other members of the supply chain all play their part in influencing how consumers navigate the wine category, and effective strategies will, over time, have an influence on what matters to consumers when they need to make a decision at the store shelf. 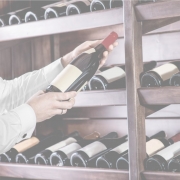 Wine brand equity stabilising after Covid, but yet to fully rebound

Not so sparkly for the UK sparkling wine market
0 replies