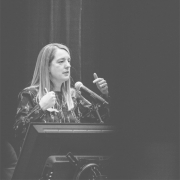 Recently CEO Lulie Halstead was the keynote speaker at the Washington Winegrowers Leadership and Legacy lunch and reflected on which wine leaders had most impacted her wine career and what characteristics are common to them.

Around 12 years ago, I was on a small domestic flight in Australia. While I was on the plane, the pilot came on the tannoy and said, “When we land in Griffith, if anybody needs a taxi to pick you up from the airport, just let me know.” This is not a common occurrence on a flight for somebody for London.

I was heading off to Casella Family Brands, based in the Riverina to visit with John Casella and the management team at their winery.

The Casella team had let me know that somebody was collecting me, so when I got off the plane, I saw a familiar face waiting to collect me – John Casella, the owner and founder of Casella Family Brands, the business behind Yellow Tail. And because I was a guest, even though I’m a supplier, John himself had driven from the winery in his truck to come and collect me.

On another occasion whilst at the winery, we had finished our meeting and when it was time to go for lunch, John led us into one of the fairly functional, and quite draughty barrel rooms, where they’d set up a trestle table with the most fabulous homemade Italian meal. The pièce de résistance however was, when we had finished eating the espresso machine was fetched from the office, so we could all have a cup of proper Italian coffee at the end of our meal. That John’s hospitality, the man whose company, in 2013, bottled their billionth bottle of wine.

Whilst speaking at an event and seeing clients in Porto, Portugal last year, I connected with Adrian Bridge, the CEO of the Fladgate Partnership. He’d said to me, “I’d be really excited to arrange a tour of my latest project whilst you’re here” which I duly did. Alongside managing his port houses, acquiring more, plus building two hotels. Adrian acquired land featuring derelict warehouses near the centre of Porto, turning this in to the World of Wine, which will is planned to open in 2021. It will have eight restaurants, a cork museum, a wine museum and a textile museum amongst other community and entertainment spaces.

On a trip to Mendoza, Argentina, I had the opportunity to visit the Familia Zuccardi winery, where José Zuccardi himself made time to meet with me. His father founded their business he told me, sort of by accident. His father was a water engineer and had visited California to see water irrigation systems for vineyards which he wanted to bring back and sell in Argentina. So, he planted some vines to demonstrate the capability of this water irrigation system in order to demonstrate the benefits to winemakers.

Rolling the clock forward and Zuccardi as a family winery are now one of the most predominant and influential in Argentina and beyond. José also told me about his children who are now very much part of the leadership of this business. José is dedicated to legacy, explaining to me that “Wine is an interaction between people and the beverage. The important thing the wine industry needs to focus on is how that experience is transmitted, what the wine means and how the wine is communicated in a simple way to future generations.”

Just last week, a book arrived on my desk in my office in London called Tasting Victory by Gerard Basset. Gerard passed away just over a year ago, and his book that he wrote just before he passed away is a phenomenal read that I highly recommend.

Gerard was the most decorated wine professional ever in the world. He was a Master Sommelier; he had a wine MBA; he had the OIV MSC in wine and was an MW. You name it, Gerard had it. But he was also the most generous and kind man I think I ever had the honour to meet.

I first met Gerard when I was teaching on the wine MBA in Bordeaux and he was my student. Can you imagine a man like that, and suddenly I’m told he’s my student to supervise? But, being Gerard, with his usual dedication and humility he learned and listened about how to conduct consumer insight research.

So why do I recall these particular moments? Because I believe, these moments demonstrated the defining qualities of leadership and legacy in our industry – and beyond.

The second characteristic, which I observe in all of these wine leaders is adaptability. Adrian, for example, is repurposing the city of Porto to leave a legacy for future generations.

A key characteristic I believe of leadership is empathy – a sense of connection and belonging. José, for example, had observed that many of his workers in the vineyards were male workers, many of whom had wives and children, but given where they’re located in relatively rural part Mendoza, there weren’t employment opportunities for the women. So, he funded and set up a textile factory. He didn’t give them the factory, but instead helped found a co-operative and it’s up to the women now to make their own profit and build a sustainable community business.

And finally, the fourth characteristic of leadership I see in these leaders is tenacity. For example, in 2010, Gerard Basset won the World Sommelier Competition in Chile. And I remember that because he gathered a group of people around him, myself included, to test and challenge him as he was preparing for his sixth World Sommelier Championships – a regime not unlike the dedicated training schedule of an Olympic athlete. He had entered it five times before, come second three times and yet, went back for a sixth time because he had the tenacity to say “I’m going to do this.”

Reflecting on these leadership qualities, it occurred to me that there’s one overarching theme that runs through these stories – and that’s time. It takes time to be generous, adaptable, to have empathy or to be tenacious. Just like it takes time to plant our vines and to allow them to mature. And often businesses in our sector are family businesses just like mine, where our timeframe is not the next quarter, it’s next generation.

Research in the time of viruses
Scroll to top