Most of the media attention about wine still focuses in Tier 1 cities like Shanghai, while the real growth story is now in Tier 2

Although we often hear China described as an “awakening dragon” or a booming economy that rivals the likes of the United States, most of China remains underdeveloped by Western standards. Step outside the comfort blanket of a Tier 1 city and into the other major cities of China that in some cases don’t roll off the tongue quite so easily, and the living conditions, retail infrastructure and social order looks very different.

This is particularly true for the country’s imported wine market, and the big story these days is in these less developed Tier 2 cities. Generally lower-tier cities are at an earlier stage in the imported wine market, but at the same time these cities tend to present more growth potential than higher-tier cities. Logistically, importing wine into most Chinese cities is not very different as they go through similar administrative processes. However, there are some exceptions such as free trade zones and ports. For instance, Shanghai, an international port, may have easier access when transporting wines. This is also true for many cities on the eastern coast. New trade agreements are created often, both domestically and internationally, so keeping up-to-date is key.

Some of the most important Tier 2 cities for imported wine are becoming better known, such as Chengdu, Chongqing, Wuhan, Shenyang, and Hangzhou. During research visits, our China Research Director was told the following analogy: if Chengdu is considered three to five years behind Shanghai, then Chongqing is three to five years behind Chengdu. Not only does this provide a clear distinctive hierarchy of growth among Chinese cities, but this also further emphasizes the point that they vary in growth, even within Tier 2 cities themselves. So while all Tier 2 cities have developing wine markets, some are more immature and opportunistic than others.

Markets in all Tier 2 cities have grown significantly in the recent years, albeit from a small base. As economic prosperity, disposable income, and exposure to Western lifestyles increases, so too does individual consumption of imported cultures and goods, including wine. The Internet has significantly shaped today’s Chinese consumer. Chinese consumers enjoy instant access and there are many e-commerces and apps now enabling this purchasing behaviour. You can find, buy, and trade wines at various price points and from different countries of origins online. Websites like Taobao and payment methods like Alipay and WeChat Wallet cuts out the middleman and allows consumers to buy based on their own agenda and preferences. With this new accessibility, Chinese drinkers are more willingness to try imported wine and are seeking ways to incorporate it into their new lifestyles.

As for Tier 2 retail, there is a focus on direct sales to large enterprises and groups, rather than targeting individual consumers. For example, most retailers utilise their personal connections to sell directly to corporate customers in large quantities or with special packages. This type of guanxi also highlights the subtlety and importance of Chinese culture that exists when doing business in the Mainland.

Brands looking to enter Tier 2 cities should also be wary of sizing, staff, and retail structure. Individual retail is still small, so you should have realistic expectations of sales and the volume that you will move. Current staff in retail stores seem to lack basic wine knowledge and appear disinterested in the products. Poor customer service can be detrimental and off-putting for consumers who are inexperienced and intimated by wine. Well-trained staff is important, as well as the ability to communicate with the in a common language. Retail space is more affordable in these cities compared to Shanghai, but shelving and store displays are unorganised. Less professional stores have wines arranged haphazardly and pricing does not appear consistent with the product offerings. This is understandable as structurally, these wine markets are young, so the level of professionalism is also developing in parallel. 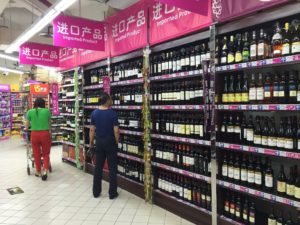 A piece of advice on entering Tier 2 wine markets: do your due diligence. Doing your research and knowing your target market before actually landing in China is critical, especially when you are entering less international municipals. As a foreign company, it is best to have a trusted partner who understands the local market well and speaks the language. Local physical presence, be it a representative or an office is advantageous—having one in Hong Kong is no longer sufficient — than any secondary research and proves that you are a serious player. Lastly, without a clear strategy, success is difficult, especially when there are so many other competitors looking to expand in the market as well. Tier 2 cities are poised for substantial growth, and it would be unwise to overlook their potential.

A sense of adventure Turning point?
Scroll to top