As unseasonal snowflakes fall outside the windows of Wine Intelligence’s London Bridge headquarters, it’s a challenge to the imagination – albeit a comforting one – to conjure up scenes of warm weather, outdoor gatherings, and the long sunny evenings of a northern hemisphere summer. Wishful thinking aside, there is a professional reason for this line of thought: we believe that summer season drinking is changing, both in terms of what products we drink, and how we drink them. 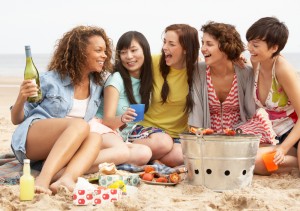 Summer – in both northern and southern hemispheres – is typically the time when white wine, rosé a

nd other warm-weather favourites such as beer and cider ascend the sales charts. This year, the trend will be augmented by the increasing range of lower alcohol drinks on offer, both in wine and other categories, though it remains to be seen how sustainable the lower alcohol trend will be given the poor quality of some of the low alcohol offerings still on the shelf.

We believe this year we will see a new dimension in the summer drinking patterns, which will be less to do with the product itself, and more to do with the container it comes in. For some time now Wine Intelligence has been tracking the growing interest in alternative packaging formats for wine. In particular, we are noticing a pattern in two areas: small format containers (typically bottles – and occasionally cans – of 250ml or below) and wine in carton packaging, typically Tetra-Pak or equivalent.

In research published last year we reported that just under half of UK consumers have bought a small format (typically 187.5 or 250ml) bottle at some point in the past, and around 8%, or just over 2 million consumers, buy this format at least once a month. Around half a million consumers say they buy wine in a carton every month (about 2% of all regular wine consumers), out of a total population of “ever boughts” of just under 4 million, or 13% of the UK regular wine drinking population.

From other questions asked in the same survey, we know that the main driver of these two types of format purchase is the outdoor occasion – be it an informal gathering in the park or more a formal outdoor event (especially where glass is prohibited). Buyers are more likely to be females in their 30s and 40s, and part of the appeal of the format is its practicality – lightweight, difficult to break – as well as (generally) costing less than a standard 75cl bottle.

More recently, some new research in the Netherlands has exposed a similar pattern. Here, one in 5 consumers say they buy small format bottles at least once a month and around 8% of Dutch consumers say they buy wine in a carton. The main drivers are again outdoor occasions and, interestingly, as a cooking ingredient.

As those in charge of new product development know to their cost – timing and momentum are everything. The growing numbers of small format bottles (and a few cans) on the shelves of shops are helping to fuel purchase – so far this critical mass is not in place for carton (predominantly Tetra-Pak), hence the lag. If summer ever does arrive in north-western Europe this year, we will be paying close attention to the uptake in small format and Tetra-Pak usage.