As a regular traveler to Poland I’ve been fortunate to witness the transformation taking place in terms of a much improved infrastructure, a rising tide of modern products and services and a profound cultural and generational shift. The Economist magazine issued a special report last week devoted to Poland, highlighting the above-average performance within the EU since the fall of the Iron Curtain in 1989 reporting an economic growth of 4% per year over the last decade. The future looks bright too with the OECD predicting an increase of the GDP per person of 2.6% per year up to 2030 and PwC forecasting an annual growth averaging 2.5% until 2050 (Source: The Economist, June 28th 2014 issue).

The wine market, like all other aspects of Polish lives still has a lot of growth potential with just 30% of adults drinking wine at least once a month which now represents 8.3 million regular wine drinkers (Source: Wine Intelligence Calibration study in Poland June 2014). In a way the wine market is in its infancy with a per capita consumption of just 3 litres and 10.5 million cases of still wine consumed in 2013. Like the overall economy the market has been growing at a healthy 4% per year since 2009 (source: The IWSR 2014).

But what is more exciting for us is the emergence of a new generation of wine drinkers. A younger generation which is enjoying a greater access to higher education, are better travelled and with an unprecedented access to imported products that are now open to drinking wine and should be leading the market growth in the wine market over the next decades. 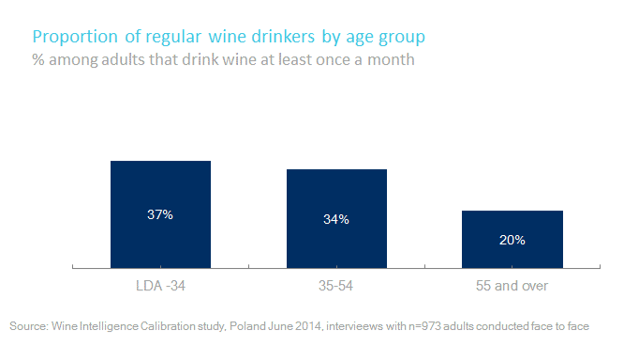 Growth in the market will be steady but any serious producer with an interest in growing in the market should aim to better understand the needs and development of these younger generations of wine consumers. We will be conducting our first Vinitrac Poland in July 2014, please contact us for more information or to include your confidential questions in the study.

Cork is still the natural choice in America