If you’re looking at how the world wine industry is keeping its head above water in the 21st Century, you might be forgiven for saying: ‘China’. Good guess, but wrong. Instead, changes in US wine drinker behaviour in the past two decades have delivered – and continue to deliver – a commercial bonanza to the world’s wine industry. America is the world’s biggest wine market by volume, and now consumes roughly 140 million more cases of wine than it did at the start of the century. Put another way, the growth this century in the US wine market, on its own, is the equivalent of the whole of the Chinese wine market in 2019.

Wine Intelligence’s new US Landscape report also shows that today’s American wine drinkers are showing increasing tendencies to spend a bit more money on wine when they buy it, even as they moderate their consumption and this exceptional volume growth story perhaps comes to an end. They are also becoming more interested in the wine category, led by a confident and curious Millennial generation seeking memorable experiences and looking to acquire cultural capital.

Italy has been – and continues to be – one of the main beneficiaries of this amazing growth story. Its volume sales to the US have more than doubled in this century, from 13 million cases in 2000 to nearly 27 million in 2018, with a current retail value of over USD 3.5 billion, according to IWSR data. According to Wine Intelligence consumer tracking data, around three-quarters of the US monthly wine drinking population – approximately 60 million consumers – say they have consumed Italian wine in the past 6 months.

Into the middle of this pastoral idyll arrives a potential catastrophe for European wines. Last month the US Trade Representative published the threat of possible 100% tariffs on still and sparkling wine from France, Germany and other European countries. This follows the imposition in October 2019 of a 25% tariff on still wine from France, Germany, and the UK (which exports almost no still wine to anyone), following a ruling at the World Trade Organisation (WTO) in favour of the US regarding subsidies paid by European governments to Airbus over a ten year period. The new tariff threat arises from the same Airbus subsidy dispute, which is the subject of WTO rulings and appeals; however many analysts believe another major driver is France’s proposed digital services tax, a measure aimed at clawing tax revenue from the likes of Google, Amazon and Facebook.

What might a 100% tariff look like to a US consumer? Taking into account standard markups through the supply chain, the Wine Intelligence supply chain cost model suggests that applying a 100% tariff to the ex-cellars price of a $15 retail wine in a store would make it a $23 wine, and the same wine would go from around $30 on a restaurant wine list to closer to $50. And that’s assuming distributors accept the same cash markup as the pre-tariff days, and therefore reduce their percentage markup considerably. In effect, these price changes would mean European producers affected by tariffs would be priced out of the key mass premium price segments, potentially leading to precipitous volume declines.

Could this be good news for producer countries unaffected by these tariffs? Possibly. A Chilean, Australian or Californian Cab Sauv may get a marginal boost from the fact that the competitor from Bordeaux is now priced several dollars higher. However, as a number of influential US wine industry commentators have stated over the past few weeks, the whole US wine supply chain will suffer because of the chaos, with distributors and importers facing major headaches of unsold stock and lost income. Over the long term, businesses will adjust, but there will be no real winners. Other commentators have raised possibility of a spiral of retaliatory tariffs, which will make US wines unaffordable in European markets

Businesses throughout the wine world will need to prepare for a nervous few weeks  – and make contingency plans as best they can – as negotiations continue between the US and the EU. As with much of the proposals (and threats) emanating from the Trump White House, the endgame might be more benign than the rhetoric. In the meantime, be prepared for a bumpy ride.

Turning the tables on the UK on-trade 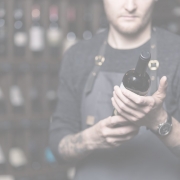 Are elements of wine label design changing with the pandemic?