After lockdown, will we rediscover our old habits or permanently adopt the new ones formed during the pandemic crisis?

Near where I live in Clapham, south London, a new way of enjoying beer from the pub has evolved over recent days. Technically, the UK is still in lockdown, with on trade operators only able to sell food and drink for take-out or home delivery, although that is set to change on July 4th, based on the UK government’s announcement on the 23rd of June.

Several local pubs located near Clapham Common, our local large park, are selling beer to take out, all within the guidelines. However, those enjoying this service have developed a new way of socialising – the ‘take not away’. The Common has turned into an extended beer garden, with hundreds enjoying the exceptionally warm weather we have experienced of late. I would hazard a guess that those migrating to the Common fit squarely into our Hedonist segment of consumers – those who are determined to return to full socialising as soon as possible – or in this case, one could argue, slightly before the restrictions technically allow it.

As part of our Covid-19 Impact Report series, published during April and May 2020, we examined the immediate and future behaviour intent of wine drinkers in 12 key global markets. We asked consumers about how they feel about returning to socialising, going out and travelling in the future. By segmenting consumers based on their future intentions, we identified four key segments: 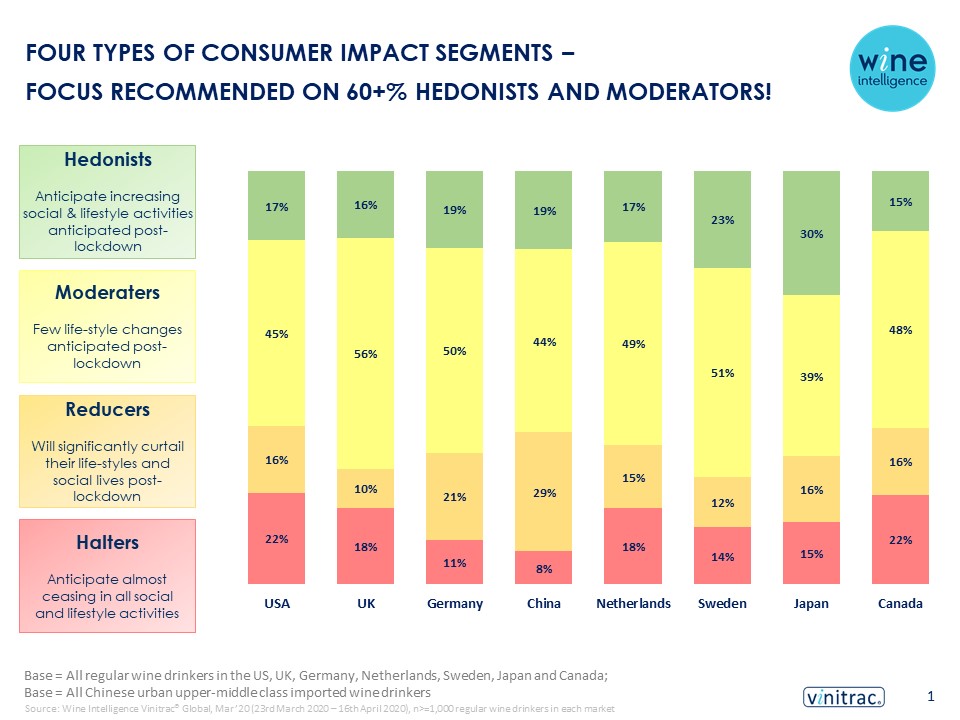 So why are we all reacting in different ways and what’s driving our determination, or not, to reignite old habits as soon as possible?

To answer this, I have been immersing myself in some theories shared by some of the world’s leading behavioural scientists who gathered online recently for a marathon 12-hour online conference called Nudgestock. To understand our future behaviour intent, they say, we need to start by asking the question: have the changes we’ve made and the options that we will have going forward been IMPOSED or CHOICE behaviours?

For many of us, the lockdown restrictions fall clearly into the ‘imposed’ category. As such, the behavioural scientists suggest that as we are social creatures driven primarily by instinctive, tribal behaviour, we will revert back to previous behaviours as soon as we feel it is safe to do so.

And that’s the key… as soon as we feel safe to do so. And feeling safe is very different from what the technical guidelines say. Over the past few months, people around the world have been told by their governments, repeatedly, that having any physical contact is dangerous, being near anybody else is dangerous and ultimately, sticking to the guidelines is an expected norm. We now need to break that new habit loop to enable us to re-engage – unless you are a Hedonist of course, in which case you have probably already broken the rules at least once.

And that’s where another element of behavioural science kicks in – social proof. As tribal creatures, we are strongly motivated to do what everybody else does – so the crowds quite rapidly build at the impromptu beer garden on Clapham Common as we see others enjoying themselves there.

What does this mean for hospitality and wine tourism?

The behavioural scientists would say that the focus should be on how to enable us to feel comfortable returning since tribally, we are motivated to do so. The wonderful Dan Ariely, renowned author and Professor of Psychology and Behavioural Economics at Duke University, suggests that when restaurants open up, at first most of us will feel nervous returning, but the key is for operators to teach their customers that things are not as dangerous as we might be feeling. He thinks that the panic level will typically be higher than the actual risk. However, when it comes to returning to a crowded nightclub for example, as this a less ‘required’ activity, the gap between fear and reality will remain higher for most of us. We see this in the consumer responses in our COVID-19 Impact Reports to going to the theatre or sporting events, with many consumers currently having a level of nervousness about re-engaging in these activities.

So if the key is to reduce the feeling of fear about returning to the hospitality sector, the starting point would be to over-emphasise the safety levels – have tables in restaurants spaced 5m apart as opposed to mandatory 1m or 2m initially… then gradually move them closer as customers gain confidence.  Operate pre-booking systems and establish contactless experiences, clearly communicated in advance. This could be a useful principle for cellar doors and tasting rooms. Typically, cellar doors are blessed with lots of outdoor space. How can the tasting experience be brought outside to groups widely spaced apart? Can parts of car parks be re-purposed initially to create the sense of space and safety many will crave? What could a picnic food service look like for the next few months?

We’ve all become very used to listening to the science in recent months, and now this must include the behavioural scientists too.

What’s the damage for UK on-trade?
Scroll to top