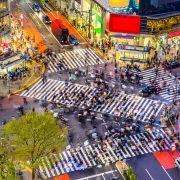 Is the ageing population a cause for concern or celebration for wine consumption in Japan?

As a country known for a ‘super-aging’ population, Japan is known to outweigh all other nations in terms of having the highest proportion of elderly citizens*, which I immediately found evident upon visiting Tokyo.

Our upcoming Wine Intelligence Japan Landscapes 2018 report (due to be published on the 27th of August 2018), highlights this shift towards older wine drinkers as nearly half (48%) of all Japanese regular wine drinkers are now aged 55 and over.

While in market last week, and as a Millennial myself, I was acutely aware that I was most typically younger than most people around me, which (being my job) got me thinking about the future of the wine market in Japan and how this might impact wine consumption here in the future.

During my trip, I conducted trade interviews for our Japan Landscapes 2018 report and one common theme was dominant – this reducing proportion of younger people drinking wine in Japan is becoming more of a concern for the wine sector. One trade expert said “It used to be that drinking alcohol meant socialisation, but younger people don’t even socialise much anymore in Japan. They might socialise with other things like games or Instagram.”

While this may sound like a sweeping generalisation, what I witnessed first-hand in Tokyo supported this. In busy restaurants or bars, it was not an uncommon sight to see a group of younger people sitting for 30 minutes without speaking a word to each other; instead, they were scrolling through whatever social media app had the most action that evening.

It was also clear from talking to members of the trade that younger consumers appear to be far more health conscious now than in previous years and are not consuming alcohol in general as frequently as older consumers.  In fact, some are actively moderating their alcohol consumption. New data from our Vinitrac® Japan survey, collected in July 2018 shows that of the 35% of Japanese regular wine drinkers who are actively reducing the amount of alcohol they drink, a high proportion of these are younger drinkers, with 57% being in the youngest 20-24 year old age group.

More data on how the Japanese wine market is handling their aging population can be found in the Wine Intelligence Japan Landscapes 2018 report, alongside data and analysis of the Japanese wine market.  If you’re interested in finding out more about the upcoming Japan Landscapes 2018 report, please email eleanor@wineintelligence.com.

Bubbles on the rise in Canada

The evolving wine category in Australia
Scroll to top