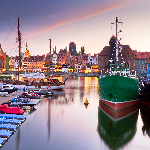 While the focus on emerging markets has been mainly dominated by China, Russia or Brazil, less is currently understood of the role of Eastern European markets in the globalisation of the world wine market. To right this wrong, our latest Landscapes Report (to be published this week) focuses on Poland as the most important economy of the zone.

To the outside world, Poland is not generally associated with many things other than a long-lasting Pope, invasions from East and West, migrants (Polish is England’s second most spoken language) or its delicious sausages. It may be time to update our understanding of the country beyond current stereotypes.

For a start, Poland was the only EU country which did not suffer a recession after the financial crisis. Its economy has grown by 33% since 2007, compared with 2% for the Eurozone. While the GDP per capita is low at US$14,000 (a third of that of neighbouring Germany) it’s expected to grow healthily. Transport infrastructure has been modernised and its retailing landscape has been revolutionised thanks to the growth of a stable network of supermarkets and discounters lead by Portuguese owned chain Biedronka, but also including Tesco, Aldi or Carrefour. And all of this has happened over a single generation. With little corruption, clear routes to market and an emerging economy, what’s not to like?

Starting from a low base of 3L per capita, the wine market has been growing at a healthy 4% per year since 2009 (fastest wine market in all of Europe). Practically all of the wine is imported as domestic production is very small. With an adult population of 31.5 million, the potential to grow is important as fewer than 30% adults currently drink wine with some degree of regularity.

The big question now is: how much can an emerging wine market grow? Or, framing the question differently, how much can a culture change and start to embrace wine when it is not historically part of everyday lives? To answer this question, we have focused on understanding differences between Polish generation. The results are positive, but at the same time worrying: the positive news is that wine consumption is more widespread among younger consumers, as they are better-travelled and more open to imported products. However, at the same time, younger consumers tend to have the same uncertainties about wine as older generations: they lack confidence and that makes them conservative in their choices and afraid to experiment.

While the potential is there and young Polish consumers will surely grow the category for the years to come, but work still needs to be done by wineries and generic organisations to engage with these consumers to succeed in this emerging and potentially rewarding market.

Learn more about the Polish wine market with our Poland Landscapes Report 2015, released this week.

Mexicans on a mission
Scroll to top