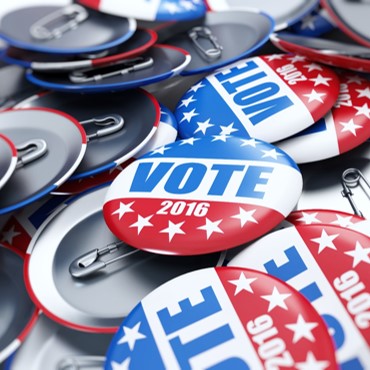 Despite (or perhaps because of) the most extraordinary White House race in decades, Americans are drinking more wine, and spending more on it

It’s difficult to know yet whether the apparent transformation of the US presidential election campaign into a version of a reality TV gameshow is having any effect on the wider American economy. However, judging from a recent spell of fieldwork in the US wine retail sector, the recent television theatre of the Trump vs Clinton television debates appear to be boosting Americans’ consumption of wine – though it’s not clear whether they are drinking in celebration of such a dramatic contest or drowning their sorrows at the lack of substantive policy debate.

The televised showdowns between the presidential candidates have been a ratings phenomenon, with the first and third debates drawing 83 million and 72 million viewers respectively. Many of the viewers used the debates as an excuse for social gatherings, swelling the takings of liquor store owners in a crucial early autumn period prior to the Thanksgiving/Christmas rush which does not normally have a strong marquee event of its own.

Away from the politics-related social drinking, the American wine market remains in remarkably good shape. The various measures of volume and value available show that the US is consuming more wine than ever before, and spending more on it. According to our upcoming US Landscapes report (due out in early November) American consumers appear to be diversifying their varietal tastes away from the traditional Chardonnay-Merlot axis. While those two varietals still lead the pack in terms of usage rates, Chardonnay has fallen from 58% usage in 2014 to 48% today, and Merlot has seen similar decline in its audience. At the same time a small but growing niche of Americans are being turned on to varietals such as Albarino & Verdejo in whites, and Sangiovese and Carmenere in reds.

The sparkling wine market is also moving into undiscovered territory. In 2015 Americans drank nearly 20 million cases of sparkling, up from 16 million in 2010 and 14 million cases in 2005. Almost all of the growth has accrued to imported sparkling, and the lion’s share of this has gone to Italian Prosecco. It’s got to the point where a number of influential market observers are talking about sparkling wine being an “everyday” drink for several million US drinkers, supplanting still wine both before and with meals.

It is not all good news though. Our tracking data is showing a small decline in involvement (the extent to which consumers care about the category), while average spend by occasion is flat or slightly down. Of particular concern will be the decline in informal food-led on-premise occasions, where the preponderance of exciting drinks in adjacent categories – craft beer, cocktails, and and now craft cider – are eroding wine’s traditional dominance in this area.

Find out more in our US Specialist & Independent Retail report out now.