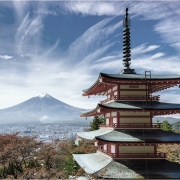 Those with long memories will recall that for a brief period in the late 1990s Japan was once seen as the saviour of the global wine business – a similar position to the one China finds itself in today. Then, on the back of a sudden and spectacular craze for wine, fuelled by publicity for the apparent health benefits of red wine, Japan experienced a temporary doubling of the wine market in the space of two years, only for the fashion to ebb away just as quickly, leaving importers and retailers with large quantities of unsold stock.

More recently, wine has had a slower and more sustained renaissance in Japan, with wine consumption volumes growing by 40% between 2010 and 2015, a trend ascribed variously to lifestyle, a population seeking more international experiences, and the proliferation of western restaurants (particularly Italian cuisine) in major cities.

Whatever the causes of the growth, the high-water mark for wine in Japan was 2015, and since then the market has been in slight decline. Why might this be? Our recently published Japan Landscapes report finds that older consumers continue to drive the Japanese wine market, in alignment with Japan’s ageing population, with approximately half of monthly wine drinkers aged 55 and over. Red wine continues to be the preferred alcoholic beverage of choice amongst Japanese consumers, and in terms of varietals, international favourites Chardonnay and Cabernet Sauvignon are consumed by the highest proportion of Japanese regular wine drinkers. Moreover, traditional beverages, sake and shochu, are also popular choices.

One of the consistent findings across the trade interviewees and consumer data was a movement towards more moderate wine drinking, with more than 1 in 3 consumers saying they are actively cutting down on their wine consumption. According to year-on-year survey data from Wine Intelligence’s Vinitrac® consumer survey, the reported twice-weekly or more frequency of consumption at an informal meal has declined from 29% of wine drinkers to 23% in the space of 12 months.

This trend towards more moderate drinking is even more noticeable among young Japanese drinkers: while 35% of the total Japanese regular wine drinkers say they are actively reducing the amount of alcohol they drink, this rises to 57% among the 20-24 age cohort.

This younger group remains a small proportion of the wine drinking population, which has for many years been dominated by the over-55s. However, the report notes that the proportion of regular wine drinkers in Japan aged 20-24 has doubled since 2014 from 4% to 8%, at a time when the population of this cohort as a whole has declines slightly, reflecting the country’s relatively low birth rate and increasing life expectancy over the past 30 years.

While the wine category appears to be more successful in reaching younger consumers in Japan, these same consumers now appear to be open to trying new products more frequently when drinking alcohol, and so will have a much broader alcoholic beverage repertoire, with wine often not being their first choice of beverage.

In addition, the notion that wine consumption in Japan was primarily limited to Old World countries such as France or Italy has shifted, with regular wine drinkers displaying high awareness and purchase levels of New World countries, particularly Chile. The proportion of Japanese regular wine drinkers who drink Chilean wine has increased from 39% in 2014 to 48% in 2018, in alignment with the volume growth of Chilean wine reported by the IWSR. According to the Wine Intelligence Global Wine Brand Power Index 2018, Chilean brands perform strongly in Japan, with six of the top 10 most powerful wine brands in Japan coming from Chile: Alpaca, Sunrise, Santa, Cono Sur, Pudú, and Casillero del Diablo. The popularity of distinctive ‘critter brands’ in Japan results in Alpaca being by far the most powerful brand in Japan, achieving high levels of brand awareness in a market where recognition is notoriously difficult to build.

Amidst the uncertainty of the future of the Japanese wine market, consumer behaviours indicate open-minded attitudes towards wine consumption. As Japan’s population continues to age, the need to educate younger generations about wine and bring them to the forefront of the Japanese wine market will become increasingly important. Luckily, it appears younger consumers drive this open-minded attitude, presenting the Japanese market with promising opportunities for the future.

Wine or weed?
Scroll to top