How Halloween is casting a spell over autumn drinks campaigns

Somehow, without seemingly any referendum or other official push, Halloween has become a cultural and commercial phenomenon in the UK over the past 10 years. Such “hook” events inevitably attract a flurry of seasonal products, and it seems this year that the drinks trade in the UK has launched itself into Halloween marketing with spectacular enthusiasm.

Take the ‘Evil Spirit Gin’, available on the cards and gifts website Moonpig.com. It turns out to be bottle of ominously green coloured spirit, distilled, we are told, in England’s “most haunted” village and then, for good measure it seems, “cursed by a witch under the October full moon”. Such inauspicious production methods apparently haven’t stopped the apple and mint flavoured gin from selling its entire stock on the Moonpig website. 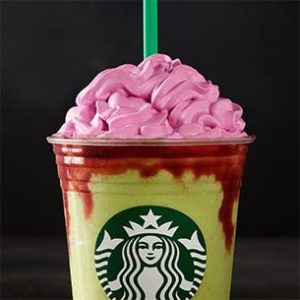 At this time of year when the chill in the air just starts to bite, us Millennials usually turn to our pumpkin spiced lattes for warmth. But amid an unseasonably warm October, and in the spirit of “Halloween as a thing”,  we can instead visit our local Starbucks and instead pick up a Zombie Frappucino, with hints of apple and caramel.

Strongbow has taken the time-honoured holiday tradition of bad puns* to its natural conclusion, launching a ‘Carnevil’ campaign. While lucky drinkers might score themselves a trip to New Orleans for Mardi Gras, British publicans have been offered something a bit more grounded: themed POS kits designed to help licensees make their own “theatre of horrors”. replete with garish posters, cobwebs and incentives for bar staff to dress at their most repulsive. 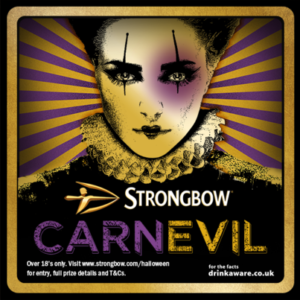 For those less willing to put in the effort, a quick repackaging can work wonders. Mast-Jagermeister are touting 10,000 tiny 2cl bottles for online retailers and the on-trade with four mythical creatures slapped on the label. Fanta have also upped their production of 150ml multipacks with Halloween imagery designed by artist Noma Bar. Both campaigns are supported by digital collateral such as spooky music, animations and videos in order to enage the younger generation. According to Simon Harrison, customer marketing director GB at Coca-Cola European Partners: “Halloween is now the fourth biggest retail event in Great Britain and represents a huge opportunity for retailers and brands alike.”

So far at least, wine appears less prone to hokey commercialisation and seasonal branding. While some wines might have naturally spooky names – the Bogle Phantom and d’Arenberg’s The Witches Berry come time mind – the traditional Halloween audience tends to eschew the wine category in favour of sweet, candy flavoured cocktails (and actual candy). But it can only be a matter of time before the marketing magnet that is Halloween draws the wine category into its orbit. WereWolf Blass, anyone?

* Here are some we made earlier: Vampari, Côte de Bones, Mournington Peninsula, Franciacorta Satan and (of course) Graves.