You can run, but you can’t hide, from some increasingly awkward questions. Transparency, one of the global consumer trends for 2013

How’s this for a blunt restaurant review? “The service wasn’t courteous, and slow.” That was one diner’s opinion of their experience of a Domino’s pizza outlet in New York City. The company didn’t just offer platitudes about “taking the complaint seriously” or “looking into the issue” – it beamed the customer’s comments across the front of the premises in large LED letters, in real time, along with other Tweeted reviews (good and bad).

A decade or more ago, transparency of this kind would have been regarded as suicidal by most businesses: you simply did not do certain things in public, especially dealing with dissatisfied customers. But transparency is something that modern-day consumers not only appreciate –increasingly, it’s what they expect.

This was one of the themes recently explored by Wine Intelligence chief executive Lulie Halstead at the Wine Industry Outlook Conference 2012 in Melbourne. For private citizens, corporations and governments, she warned, “this is not an environment in which you cannot tell the truth”. In other words, she said, “you can run, but you cannot hide”. 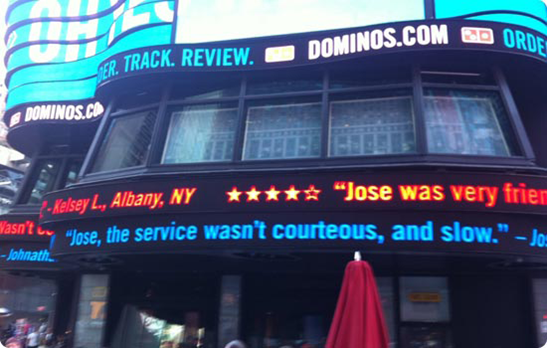 The internet and social media have ensured that those who try to subvert that theory are quickly exposed as crooks, charlatans or cheats. Consumers want honesty and transparency from the organisations they do business with, whether it’s in the form of an ingredients list of a loaf of bread, or the corporation tax bill for Starbucks. Many companies, like Domino’s in New York, are deciding it makes sense to make the first move.

In the wine business, this trend towards transparency has been noted by none other than Miguel Torres. For him, it’s not enough merely to strive towards organic viticulture. He told the Austrian wine magazine Wein.pur: “I would love to be able to create a new wine category for the market: organic-sustainable wines, which for me would mean an organic wine which has been made using environmentally friendly practices.”

This requires being honest with consumers, not just about viticultural techniques but CO2 emissions, recycled rainwater usage and any activities that can impact on the environment. Torres is a strong advocate of Wineries for Climate Protection, an initiative with the support of more than 100 Spanish bodegas. “We want to make it possible for a study to be carried out on the practices used to protect the environment in the winemaking business and train winemakers so that they can contribute to the cause,” Torres added.

The transparency trend presents some challenges for a wine industry that doesn’t (usually) print ingredients on its labels, and which relies to some extent on a cosy consumer perception of winemaking which can be at odds with the huge mechanisation that exists in vineyards and wineries alike. It’s not certain how that particular circle can be squared, but one thing is for sure: consumers are asking some awkward questions, and there are more to come.

The language barrier
Scroll to top