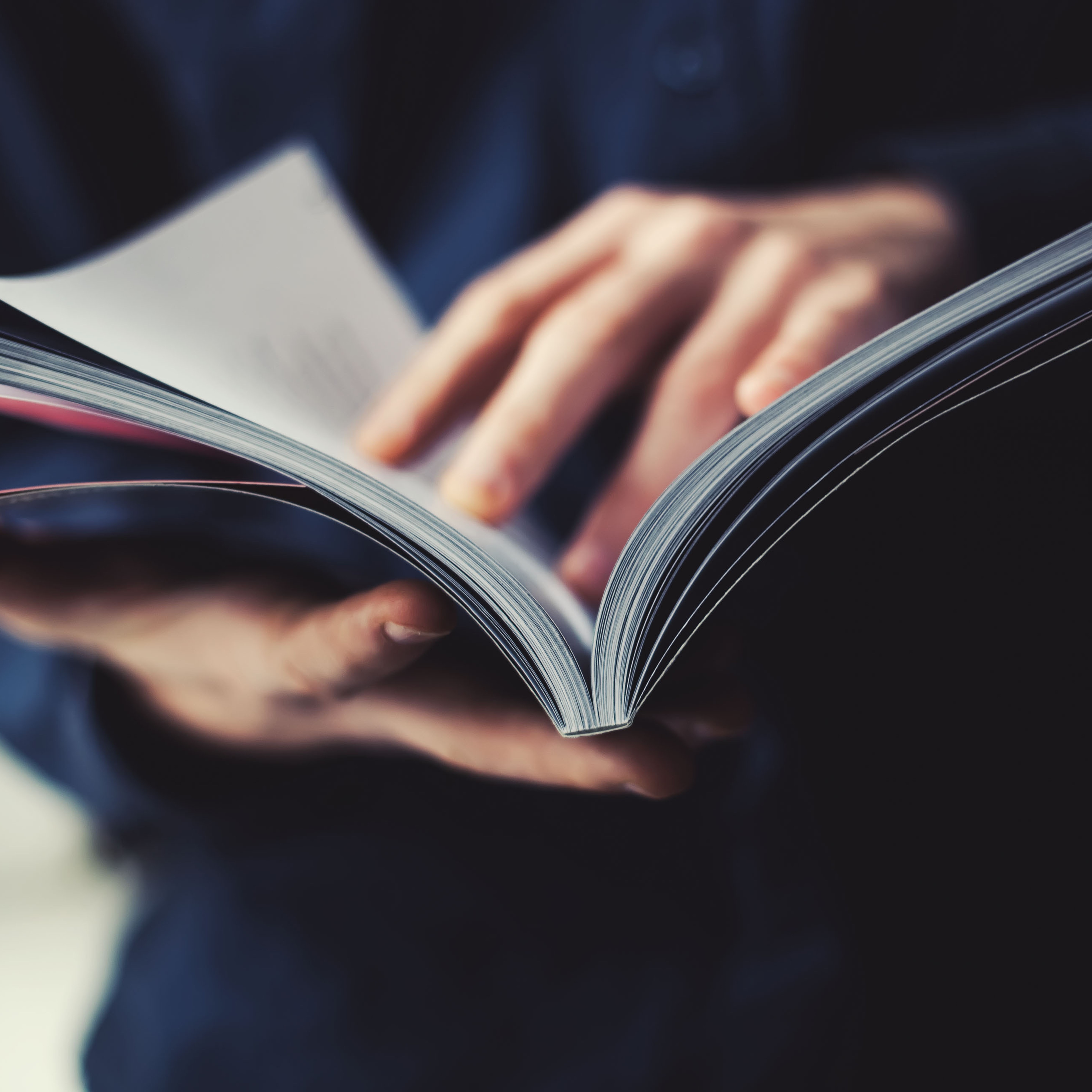 The average retail price of a bottle of still wine has risen over time in the UK. Good news, right? Err, no, not exactly. Unfortunately, the chart below paints a very different picture. It suggests that the only reason wine prices have risen over the past 30 years is because the government has taxed wine more. The blue series, of ex-tax price – what we’re paying for the bottle and its contents before government gets in on the act – has remained completely flat, in real terms, for 20 years: £1.47 in 1992 and £1.46 in 2012. 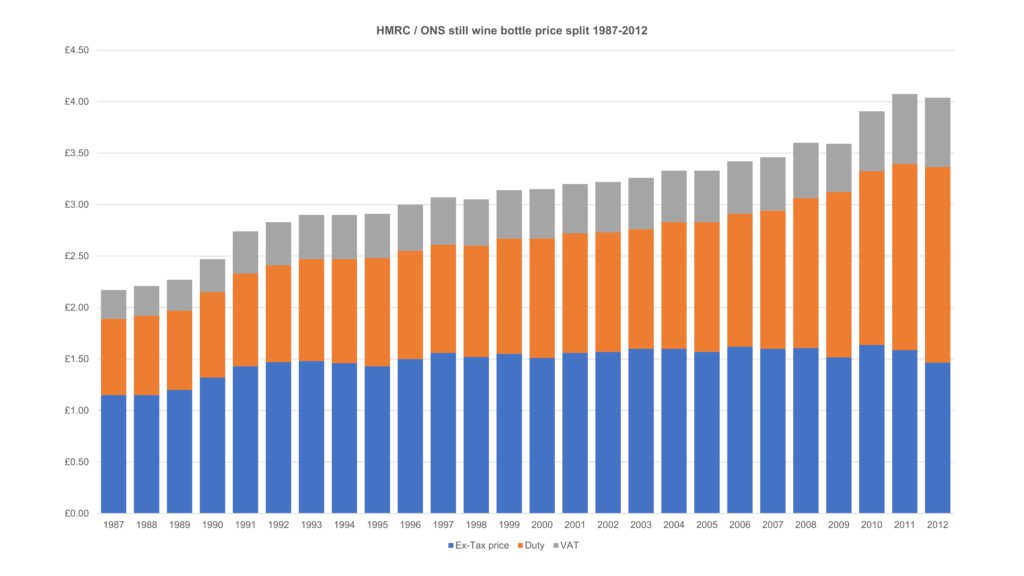 More recently, Duty rates moved from £1.90 in 2012 to £2.16 in 2017 and WSTA’s bottle price estimate has gone from around £5 to £5.56. Further, the WSTA commented in July that the most recent uptick from around £5.40 was being driven by another extraneous factor – the fall in Sterling against the Euro since the Brexit vote.

So, if we took these bottle price data at face value, they would point to a persistent failure of marketing: suggesting that the UK wine trade has not managed to move consumers to buy better wines at retail at any stage in the last 25 years.

But as good researchers, we shouldn’t take data at face value. We must remember that Nielsen data (and doubtless ONS data too) tend to under-survey independent retailers, so probably underestimate higher-value buying behaviour and would therefore ‘lose’ consumers who do trade-up by shifting their buying to a local wine shop. The picture is therefore doubtless rosier – and even Nielsen’s figures suggest growth in higher-end price brackets – moving from 1.2% of volume in 2012 to around 1.8% by 2015.

However even with this caveat, the numbers give an uncomfortable assessment of the UK wine industry’s performance with the bulk of consumers. So the big question remains: how can the trade really change consumer behaviour significantly and persistently?

One answer: teach them.

As the graph shows, if consumers take a formally-tutored wine course of at least 1 day in length, their average bottle spend increases by +12% compared with those who are interested in taking a course but haven’t yet: 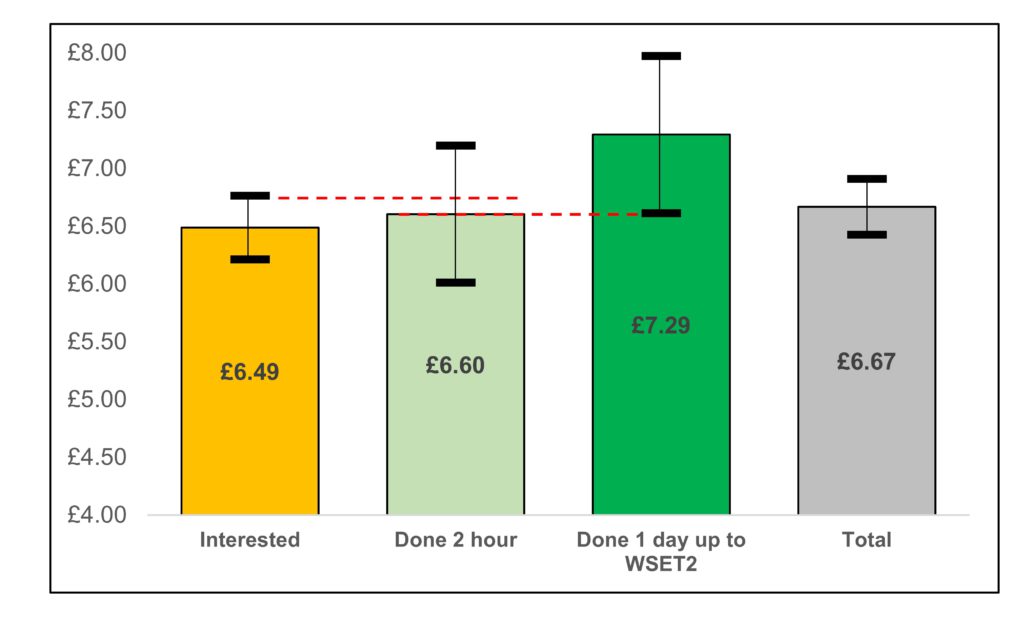 This was a central finding from my MW Research Paper, Elementary consumer wine education: UK market size, characteristics and significance to the trade, submitted in June 2017. Selected results are presented here with kind permission of the Institute of Masters of Wine (the full report can be requested from the Institute via their website).

This +12% result was estimated using data from around 1,000 consumers completing the UK edition of Wine Intelligence’s Vinitrac® omnibus survey. An additional set of specific questions were included to probe consumer interest in basic wine education and to evaluate the impact on their behaviour. By splitting this sample into groups who had done courses and who had not, it was possible to compare their claimed average bottle spend, to isolate the impact of taking a course – yielding the above graph. Importantly, to ensure as close a like-for-like comparison as possible, the non-takers were filtered to include only those engaged enough in wine to be interested in taking a course (at a score of at least 7 / 10 on an interest scale); age, gender and above all income were also controlled for.

What’s most remarkable about this finding is that it replicated almost exactly the results found in a deeper, 24-month, longitudinal study conducted a few years back amongst students taking a 5-week course in Quebec. This revealed an uplift in wine spend for 77% of attendees, averaging +16.5% in value. When extrapolated to all students, that comes out to be +16.5% x 77% = +12.7%.

To explore this effect more deeply, a second survey of around 400 respondents was conducted, but in this case, sampled from customers of the UK’s Local Wine School franchises. This meant it was possible not only to generate a large sample of course takers for more granular analysis, but also to cover a range of different types of courses.

Local Wine School’s nationwide franchisees offer both WSET certified Level 1-3 courses, as well as their own consumer-orientated 2 hour, 1 day, 4 week and 8 week non-certified courses. These are broadly reflective of the different types of course that most practitioners offer, giving a set of respondents who have taken courses typically found in the market.

This demonstrated that the average spend goes up in line with how long people study for (and we’d already seen that a 2-hour taster course wasn’t enough to make a significant difference): 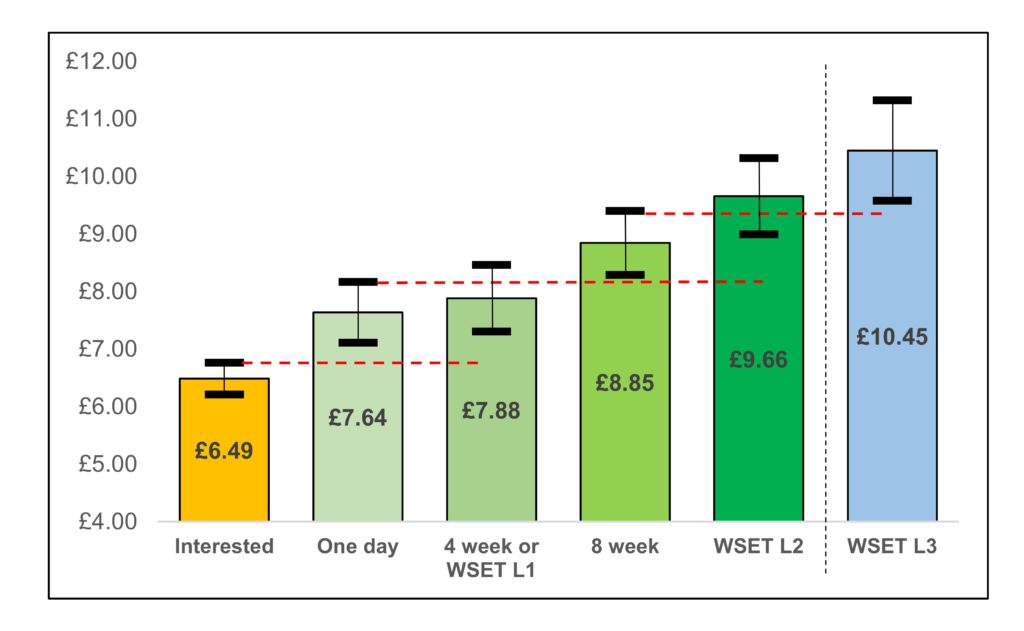 One 8-hour day or 4 2-hour weeks have the same relative effect, but extend that to 16 hours of tuition over 8 weeks or 24 hours over the 3 days of WSET Level 2, and spend moves progressively (and significantly).

Similar uplifts were also seen with spend in the on trade as well as with broadening the number of grape varieties people have drunk.

These effects make sense in a complex product category like wine and intuitively hold true. But intuition alone doesn’t make business cases and won’t persuade sceptics. With this study, we now have concrete data that shows what teaching consumers about wine can do.

So, here’s a strong message to the wider wine trade: if you want more consumers to spend more on bottles of wine, and drink those new and interesting wines that you love, invest in teaching them about wine.

That could be providing courses yourself or partnering with organisations like Local Wine School or the Association of Wine Educators to provide them on your behalf, because the bottom line is that it can and does pay.

Furthermore, with the number of consumers who are interested in taking a course estimated at 6-7,000,000, this is a big enough scale to make a material difference to those average figures that have remained so stubbornly flat for so long.

For the full results, including the characteristics of interested consumers, the types of course they’ll pay for, the role of online, and practical considerations for practitioners and the trade, copies of the Research Paper (© 2017, Institute of Masters of Wine) can be requested from the Institute. Details can be found at: http://www.mastersofwine.org/en/aboutus/rp.cfm