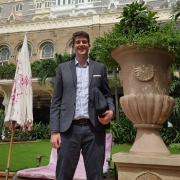 Last month I packed my bags for Mumbai to join Sonal Holland MW, India’s first Master of Wine and our partner in the India Landscapes Report project, for a research trip to collect some primary data ahead of Wine Intelligence initiating coverage of this exciting market.

The scale of our task quickly became apparent. Sonal’s words to me as we left the airport resonated with me for the entire trip: “India is a place of contradiction – a statement I make about Mumbai will most likely be the complete opposite in another part of the country”.

Indeed, one can understand India’s size and diversity at an intellectual level, but nothing quite prepares you for the real thing. It is the second largest country on the planet with a population of roughly 1.3 billion, divided into 29 states and 7 union territories, encompassing over 3,000,000 square kilometres of land. Within its physical grandeur lies society that is pluralistic, multilingual and ethnically diverse. It is only natural that a market this large resists a one-size-fits-all analysis.

One of the major contradictions in India involves the reason why I was visiting: the place of alcohol in society. India is the largest consumer of whisk(e)y in the world, with the country consuming 1.5 billion litres of the spirit, according to research undertaken by Bank of America Merrill Lynch – three times the volume of the US, the next-biggest consumer of the category. Yet in a number of regions – the states of Bihar, Gujarat, Manipur, Nagaland and the tropical island territory of Lakshadweep – there is a partial or complete ban on alcohol, and prohibition or severe restrictions on alcohol have been variously attempted and repealed among India’s states for over half a century.

Some observers have tried to explain this huge variance in relationship with alcohol on religious grounds, citing the fact that India is home to the world’s second-largest Muslim population. However this theory doesn’t stand up to scrutiny: for instance in the prohibition state of Bihar, only 17% of a population of over 100 million follows Islam, while in Jammu & Kashmir (68% Muslim) there are no restrictions and the drinking age (18) is the lowest in India. A more convincing analysis is that India has had a long and complex relationship with the anti-alcohol movement, which was closely aligned with the Indian independence movement in the first half of the 20th century (Gandhi was a strong supporter of prohibition) and has been a feature of its politics ever since 1947.

How does wine fit into this picture? In truth, it is not front and centre in the alcohol debate. Indeed, it remains a relatively niche product, far behind whisky and beer in the popularity stakes. As the country’s educated middle class expands, it is experiencing exciting levels of growth in some areas, though to be fair this increase remains modest when aggregated at a national level. One piece of good news: the engines of the wine market – Mumbai, Delhi, Bangalore, Chennai – do not tend to experience much in the way of practical restrictions on consumption. In some cases, the legislation actually works in wine’s favour: the state of Maharashtra has imposed a minimum drinking age of 25 for liquor, and 21 for beer, but wine remains 18; that state also has a statutory (but rarely enforced) requirement for consumers to obtain a permit before consuming liquor / spirits.

The elephant in the room with us during our research trip was whether we will see the hockey-stick growth curve of wine in China repeated in India. The tempting analysis is to look at population and economic growth rates in both countries, observe that India will overtake China’s population sometime in the next decade, and possibly one day have an economy to match, and draw a linear conclusion.

Our observations, and the data we collected in Vinitrac® India, tell a more complex and nuanced story, which we will be revealing in more detail in the first India Landscapes report later this month – not surprising, really, given that India makes a habit of defying simplistic analysis. One might argue that China is hardly one-dimensional either, so there are some parallels to draw. Perhaps for now we can observe that both countries share, which matters in the wine world, a large and growing segment of educated, urban internationally-minded, ambitious, well travelled, economically powerful consumers who do not necessarily want to live exactly as their parents did.

The three traps of label design