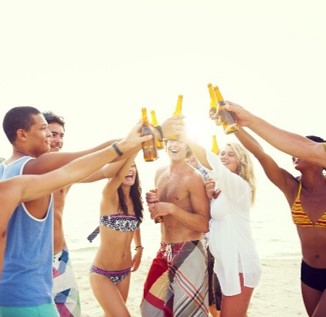 American teenagers tend to think a lot about alcohol, despite – or more likely because – it’s not legal to drink until 21. What do they think about wine?

We asked a group of younger Millennials, aged 16 to 21 (born between 1993 and 1998) about their perceptions of wine. Given their age, most of these respondents couldn’t legally drink in the US. Their experiences with alcoholic beverages, therefore, came from three places: generic televised and printed advertisements, school/college parties (where most would have had an illegal drink or two), and family gatherings (where the law is a bit more relaxed/vague, depending on the state). In response, many suggested that wine wasn’t something that belonged at a party, because they found it more respectable or even “fancy”. Interestingly, their parents may be to blame (or thank) for this.

For those who can’t drink legally and haven’t yet consumed alcohol, they were very verbal with their perceived relationship to wine. It’s something they’re “very comfortable with” and even named it their favorite form of alcohol. These were the people for whom wine and family gatherings go together like butter on toast. A parent sharing a small glass or sip of whatever they were having with them once or twice in a year alone had a huge effect on the respect these teens developed for wine.

The young tasters of wine aren’t very likely to bring wine from the home sphere into the party sphere as they get older; it just doesn’t belong. From watching their parents interact with wine, these youths have come to understand that good wine is more expensive and cheap wine can be really bad. They wouldn’t drink wine out of a plastic cup, though drinking wine out of a box seems to be ok in certain circumstances. The same can’t be said for beer, which, although it may be shared at home, is the most present at American college parties.

It is important to note that parental encouragement of alcohol consumption doesn’t really apply to other types of drinks; you don’t often see parents giving their kids shots of vodka to go with their steak. Parents don’t forget that wine is alcohol and by giving it to their child are saying it’s ok to drink. It’s because of this implied trust between parent and child that has lead wine to the status so many American teens have given it today.

It’s all in the mind