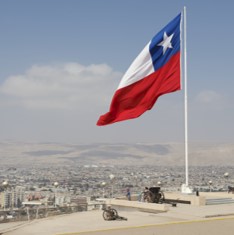 On the other hand, Chile, its neighbour on the left of the Andes, reaches only 19L per capita annual consumption of still light wine. This is more surprising considering that, in terms of volume, Chile is among the top 10 wine-producing nations. While Chile’s export markets continue growing exponentially due to the burgeoning demand for Chilean wines (particularly in Asia), wine professionals in Chile are also zeroing in on the untapped opportunity within their own domestic market.

In 2014, Wines of Chile launched a campaign called Nos Gusta El Vino (We Like Wine) to encourage domestic wine consumption and today, results are beginning to come through. Two years after the campaign was launched and several articles have commented on Chile’s growing wine consumption and forecasts predict that it will continue to grow at a healthy rate. The rise is partly attributed to an emerging segment of young professionals with solid disposable incomes keen to find new flavours and to spend greater sums on gourmet products. This trend has been particularly noticeable in regard to beer, which is by far the nation’s favourite alcoholic beverage. Chile has undergone a craft beer revolution in that every bar and restaurant now offers a large selection of craft beers from both Chile and abroad on their drinks menu while, in supermarkets, craft beers occupy a prominent place on their shelving. As a result, Chileans now consume approximately 43L of beer per capita a year (double the amount of wine).

Although it may be on a smaller scale, wine too is also beginning to show a similar change. In Santiago, the rise of new establishments such as Bocanariz restaurant and the wine shop in the Santiago Wine Club suggests that consumers are becoming more involved in this category and are looking to try a diverse number of styles – from sparkling and blended wines, to wines from more boutique producers. Although this is still a relatively small movement, the future of the Chilean wine market promises greater diversity.

Wine Intelligence will be publishing its first Chile Landscapes report this year. It will provide a more detailed insight into the Chilean wine market and investigate consumption trends in the wine category. To add bespoke questions, test label designs or examine brand health in our next Chilean Vinitrac® wave, please contact Juan Park.

Flavour of the age
Scroll to top