What the the gigantic retail frenzy that is China’s Single’s Day tells us about how consumer motivations are changing.

When a bunch of university students decided, in 1993, to hold a small celebration of their lack of a romantic partner, they were not imagining creating the single biggest retail event on earth. So it is that 11th Nov, so called the “Bachelor’s day” in China, now grabs the world’s interest, accounts for tumultuous amounts of spending, much of it self-indulgent, and has come to symbolize the power of the new Chinese consumer.

Traditionally, if you are single, you are expected to “Tuo Guang” as soon as possible. “Tuo Guang” – 脱光 in Chinese can mean “say good bye to being single” but can also mean literally “get naked”. If you don’t have the guts to really getting naked, you can still get your wallet naked and indulge yourself by crazy shopping and treating yourself.

2014 has seen another successful 11 Nov for the Chinese e-commerce players. By lunchtime on the 11 Nov 2014, sales on Tmall alone had achieved almost 6 billion USD, equivalent to the full day sales number of 11 Nov 2013. The Single’s Day sales on Tmall has achieved over 9.3 billion USD.

The retail success story that is Single’s Day has become rather self-fulfilling of late. E-commerce websites and peer-to-peer sellers have been pushing the consumers very hard with heavy promotions and “pre-orders” for the day, primarily to boost the all-important sales number for the day, which has become a figure of increasing prestige and competition among major online shopping sites. However in their rush to out-sell their competitors, the major retail sites have actually had to make serious efforts at making shopping enjoyable and convenient. It is this, along with the emerging spending power of young, educated, urban dwellers in their 20s, which is really driving the trend.

As well as pre-orders, and standard money-off deals, e-retailers have been coming up with some fairly compelling and original offers. Promotion activities used this year are beyond simply lowering the price. With “Free delivery!”, “Spend 188 yuan, get 188 yuan for free!”, “More than 50% off!”, the “tic toc” count down on each website saying “Limited time discount”, constant messages from e-commerce sellers promoting their sales and extremely fast response customer service, it is very difficult for any normal person to stay calm. As consumers, you simply fear to miss a good deal if you don’t buy anything online on this day. There are much wider choices available online and they are on sale!

For instance, on Tmall, consumers can not only order normal consumer goods such as clothes, smart phones, food, but also houses, cars, or even rent a girlfriend/boyfriend (I am not sure exactly what’s involved in this one). You can buy not only domestic brands but international brands, such as Calvin Klein, American Eagle or Jack Jones.

In a land where fakes lurk around every corner, the online retailers take great pains to demonstrate that their goods are the real thing, and would face instant ruin by WeChat if it turned out that they were selling anything other. 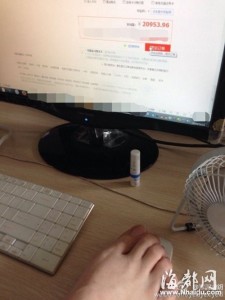 Husband, whose hands were tied by his wife, ordered 20,000-yuan products online by foot on 11th November

Single’s Day is also teaching people to make big purchasing decisions with the tap of a smartphone. During this 11th November Alipay – an online payment service similar to PayPal – was logging just under 5 transactions per second, around 3 times as much as the same period as last year. Shopping is and will be more and more on the go: 40% of sales on Tmall are already made from mobile devices.

Perhaps the most interesting development for long-term China-watchers is that consumer behaviour may actually be shifting from others to self. In the past, consumers used to trade up only when they were buying for someone else. Single’s Day appears to be actively fostering a consumer culture where it is seen as OK to trade up for your own benefit, ie treat yourself. It is now widely believed (this year will probably prove it) that wine sales on Single’s Day will now exceed other traditional gifting holidays ie. Mid Autumn Festivals, National holiday or Chinese New Year.

As I was writing this article on 11th November, a friend of mine in Shanghai WeChatted me her order of a Dyson vacuum cleaner. “I have been working so hard this year, I deserve something really good. This brand is the Apple of the world of vacuums”, she said.

Who Will Buy “Masstige” Wines in China?
Subscribe to our newsletter

Good cheer, for some
Scroll to top