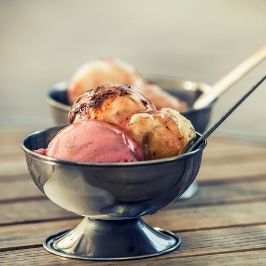 For all our industry’s efforts at improving wine quality, the secret of success may be found inside a consumer’s brain.

Does “ice-cream” taste different to “Frozen mousse”? They do sound quite different. But what if the two products were exactly the same? What is the impact of changing a description of a product on how much it is enjoyed?

This is exactly what the Experimental Psychologist Prof Martin Yeomans and star chef Heston Blumenthal tried to answer in 2008. Their test was simple, yet ingenious. Two sets of participants were served the same dish, a Smoked salmon ice-cream, but they received one of two alternative descriptions: half of the participants thought they were eating an “ice-cream” and half thought they were eating a “Frozen savoury mousse”.

The results? Well, neither group particularly liked the dish – scores for both groups are below 1.5 out of 5.

But what is relevant here is that the “Frozen savoury mousse” was significantly more liked than the ice-cream. And the difference is huge. 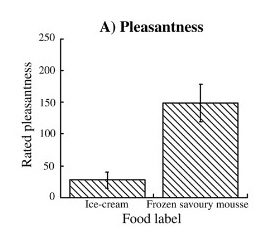 Were consumers in the first group lying? Were they ashamed to say they liked the unusual tasting ice-cream? As it turns out, no. Instead, they probably liked it less because it clashed the most with what their expectations were. The description crossed a fundamental line: the brain doesn’t like to be fooled.

Your brain is actually quite a difficult, stick-in-the-mud character. When you feel strange taking the first steps on a non-functioning escalator, the brain is adjusting between what it expects based on experience vs. what is actually happening (the mechanic stairs not moving when it normally does). As a result the body feels weird and you find your balance difficult to control.

The brain expectation effect does not stop here. In the Yeomans-Blumenthal test, the subjects eating the ice cream were also more likely to think of the dish as salty compared with the mousse-eaters. The dishes were exactly the same, so their notion of saltiness came from the difference between their expectation (traditional sweet ice cream) and reality (a fish-flavoured frozen mousse).

There is also plenty of evidence that the brain expectation effect is strong when it comes to the wine category. For instance, researchers at the University of Bonn told consumers they would be trying wine from very expensive (£55 a bottle) to very cheap (£3 a bottle) they found that the people who thought they were being served expensive wine tended to like it a lot more than when they were served the same product billed as cheap plonk.

After all, it might be that consumers are not put off by the “taste” of a bone-dry Sherry or the sweetness of Port wine, maybe it’s their pre-taste expectations that need to be adjusted.

Source: The role of expectancy in sensory and hedonic evaluation: The case of smoked salmon ice-cream by Martin R. Yeomans, Lucy Chambers, Heston Blumenthal and Anthony Blake (link to article)

Freedom from choice
Scroll to top