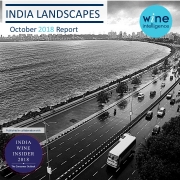 India is an enigmatic and rapidly changing nation. On the one hand, is a land of opportunity, a country of over one billion people, nearly half a billion above the legal drinking age, boasting a young demographic that’s open to experiment.

On the other hand, India’s AlcoBev industry is shackled by cripplingly high taxes and a dense regulatory system of antiquated laws. In this paradox lies significant future opportunity for the wine industry.

As one of the fastest growing economies in the world, with a GDP expected to grow at over 7% in 2018, India with its thriving middle-class population, the country’s current wine consumption figures serve to illustrate that the wine market is still in its infancy, a fact demonstrated by the lack of knowledge about varietals, wine-growing regions amongst drinkers of both domestic and imported wine.