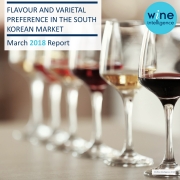 Key highlights of the report:

Drawing on data collected from our January 2018 wave of Vinitrac® (the world’s largest ongoing omnibus survey on wine consumer attitudes and behaviours), secondary sources and market experience, this 60-page report offers a detailed analysis of how the market is performing and includes:
▪Favourite red and white grape varietals among semi-annual grape-based imported wine drinkers in South Korea by age
▪Appeal of style and flavour descriptors for both red and white wine among semi-annual grape-based imported wine drinkers in South Korea (those who drink imported wine at least once every 6 months) – including appeal level by both gender and age
▪Appeal of flavour descriptors and varietal preferences by wine involvement segments, including the demographic profile of wine drinkers in three wine involvement segments

Flavour and Varietal Preference in the South Korean Market 2018