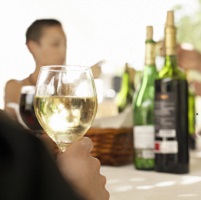 The world’s biggest market for wine gets slightly bigger, thanks to a growing Hispanic influence

America is now the undisputed heavyweight champ among global wine markets. Despite being a distant second to beer in terms of consumption volumes, citizens of the United States put away 314 million 9 litre cases of wine last year (source: IWSR). What’s more remarkable about this dominance is that it comes in a country where wine is consumed regularly (which we define as at least once a month) by only around 4 in 10 adults, according to Wine Intelligence’s latest calibration studies on the US market*. By way of comparison, 65% of Australians say they drink wine regularly.

The positive news for the wine industry is that this number is growing: we estimate there are now 93 million regular wine drinkers in the USA in 2015, which means that a net 12 million new regular wine drinkers have joined the category over the last four years, according to the data we collected in July 2015 and compared with an identical study we conducted in 2011.

The slightly less good news is that the population of drinkers has increased faster than wine volumes, which have been chugging along at 1% per year during the same period. One reason is that the new entrants are drinking wine slightly less often.

Two demographic changes are driving growth in the US market. It has been excited by the “Millennial” generation for some time, and sure enough they are gravitating to the category. Since 2011 some 3 million Americans between 21 and 35 years old have become regular wine drinkers.

The good news is that the typical Millennial tends to spend more on wine than their older peers – they are more likely to buy it in bars, restaurants and upscale liquor stores, and less likely to be in the market for Two Buck Chuck. On the other hand, by spending more money on it, and treating it more like an interesting luxury than an alcohol delivery mechanism, Millennials are tending to drink less wine than people in their 50s and 60s, which is causing overall wine volumes to stall.

The more telling long-term growth trend in wine drinkers is coming from another part of the American demographic: the Hispanic population. Historically more inclined to drink beer, both first and second generation Hispanic-Americans are now moving in the direction of wine – albeit slowly. The reasons vary: a perception that wine is a healthier alternative to beer; the increased spending power of women in the Hispanic community; and the growing wine culture in Central and South America.

Currently 15% of the US adult population (21+) are now of Hispanic origin, or roughly 35 million people (Source: US Census Bureau). According to our recent study, about 13 million Hispanics, 6 million of whom mainly speak Spanish and the remainder who are bilingual (according to their survey responses) drink wine regularly.

Annoyingly for the wine category, they too don’t tend to drink wine as often. This is especially true of regular wine drinkers who mainly speak Spanish (whom we dubbed 1st generation Hispanics), whose main drink is still beer; 27% of this group only started drinking wine when they got to America. Their reasons for drinking wine sparingly are typical of low-involved wine consumers around the world: the category is too complex and intimidating, and they tend not to feel comfortable buying the stuff. Fortunately for the wine industry, these behaviours tend to disappear among 2nd generation Hispanics (who mainly speak English, and come across as much more confident about wine).

The wine industry is excited by the long-term demographic bonus offered by the Hispanic population in the US. The Pew Research Center is predicting that the Hispanic American population will more than double in the next 35 years. If current incidence rates were maintained, that would add another 16 million regular drinkers to the wine category, taking it well over the 100 million milestone. The key challenge for the industry today is to understand this group better, and start designing some products to entice them away from the reassuring familiarity of their end of the day cerveza.

Find out more about the Hispanic Wine Consumers in the US Market report.

Winning on the home front
Scroll to top