When I grew up in a small town in southern China, my hometown had an unwritten rule that dinner parties should be separated to two tables: one table for men to ganbei Baijiu and play drinking games, the other for women and children to eat (with soft drinks). Although men enjoyed booze during social events, few drank regularly. My father, who quaffed many glasses of Baijiu with friends, never drank on his own or when having everyday meal at home. He saw alcohol as a functional skill to master: I remember he used to tell me how important good drinking capacity was to career advancement.

When I was in university in Shanghai 5 to 6 years ago, I noticed the changes in the drinking behaviour of my generation. Beer was the most common alcoholic drink when I ate out with friends, but no ganbei was involved. Beer was the natural choice for several reasons: available in every store and restaurant, affordable to college students, and, most importantly, much nicer taste than the liquid-razor-blade Baijiu. We enjoyed beer also because it brightened up the occasion and it went well with Chinese food (especially with spicy Sichuan food or hot pot).

Now as a researcher in the wine sector, I have the privilege to hear Chinese consumers talk about wine and observe how they drink wine. In a recent survey with a representative sample of around 1,000 Chinese urban adults (unlike our other surveys, we didn’t restrict it to just wine drinkers), we asked for their views on different types of alcoholic beverage: grape-based wine, Chinese Baijiu, beer, imported spirits, and Champagne.

The majority of respondents associated grape-based wine with positive attributes. Unsurprisingly, “good for health” remained the top descriptor for grape-based wine, based on the widespread and persistent belief in China that wine, specifically red wine, has health-giving and anti-aging properties. Two in five urban adults associated wine with “good taste”, a ratio significantly higher than beer and Baijiu. The beverage also scored high in positive descriptors such as “romantic”, “makes me feel accomplished”, “stylish”, “worth paying more for”, “sophisticated”, etc. Together with Champagne, wine was seen as more feminine than masculine, which partly explained its increasing appeal to the new generation of educated, financially independent women in China.

As we look at the consumer perceptions and drinking habits of alcohol in China, a lot is changing, and quite rapidly. Almost a quarter of Chinese urban adults now see Baijiu (and very likely the ganbei tradition) as “out of date”. At the same time the rising generation of educated urban Chinese appear to have connected with the idea of wine as a lifestyle product to facilitate social interaction, demonstrate sophistication and enjoy instead of beer or Baijiu. 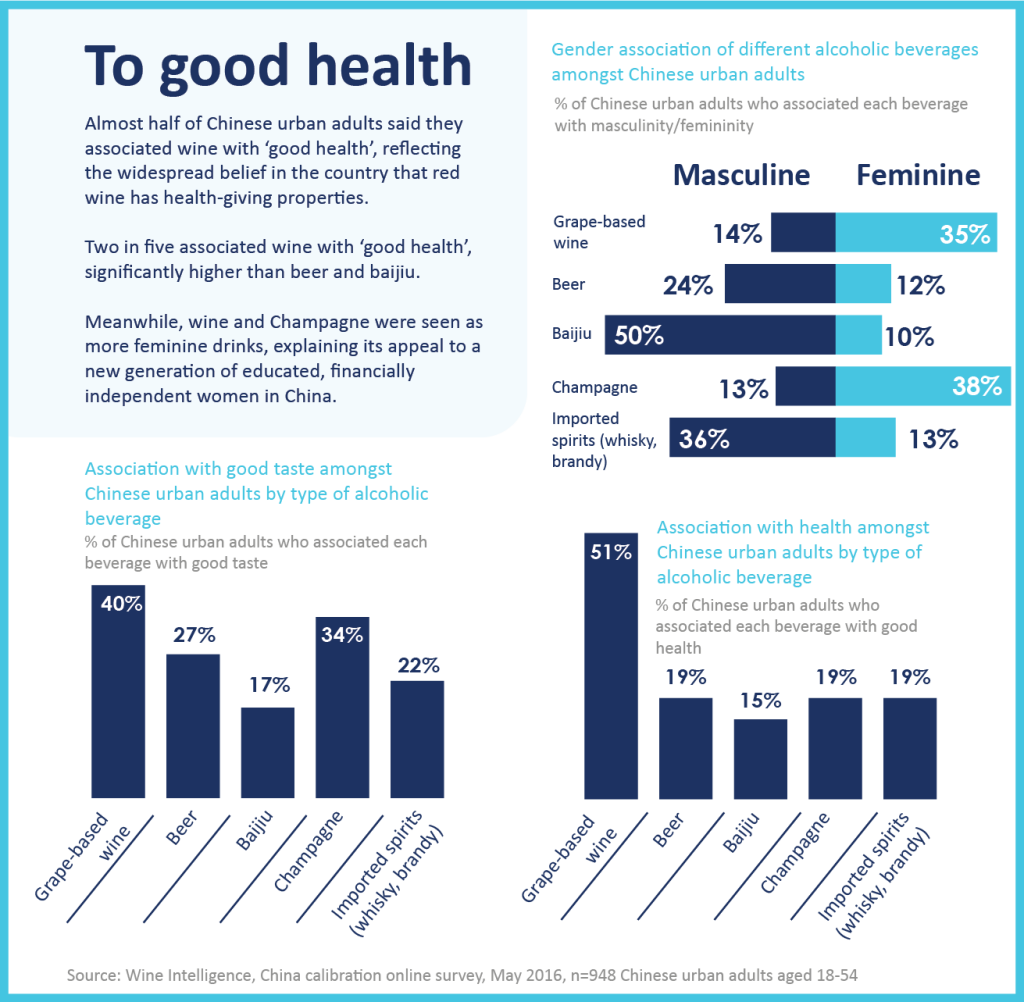 Are we really that bad at innovation?
Scroll to top